Pirate Booty: Jared Veldheer is in the Business of Working Out, TO and the Raiders, and More

Share All sharing options for: Pirate Booty: Jared Veldheer is in the Business of Working Out, TO and the Raiders, and More

Happy Day-Before-Friday. There was a bit of disturbing lockout news, but it is checkered with good, and it all depends on how you interpret it. Really, there isn't going to be any good news until the news is there is no more news to report because it's over.

In the meantime this is a very special Pirate Booty because I have to talk about women's soccer for a second. So the U.S. beat North Korea on Monday, but it wasn't really a fair match. According to the North Korean coach several of his key players were struck by lightning days before the match. Don't you just hate when that happens. That pesky lighting. Here is the actual quote, as translated from the actual North Korean National coach:

Our players were hit by lightning during a training match. More than five were hospitalized. The match was on 8 June. The goalkeeper and the four defenders were most affected

What the hell kind of lightning storm was that? The North Koreans should stop practicing with antennas on their head. Alright, back to the Raiders and football. Jump over....

Jared Veldheer is starting a business with his spare time. The great thing is that his business involves him showing off his workout techniques for others. I think he'll be ready to go when the season starts.

Tim Brown is spending his time to help kids.

Former Raiders star comes out of retirement for kids -  Sacramento Bee
On Tuesday, Brown brought his arm out of retirement to throw passes to 60 mostly fatherless and disadvantaged youth, along with 50 volunteer dads at the 9-1-1 for Kids/CHP Tim Brown Mentor Mini Camp at the California Highway Patrol's Academy in West Sacramento.

This is an awesome thing Tim Brown is doing, but I can't help but picture this as Kingpin's Ernie McCracken helping fatherless kids.

Louis Murphy has found new ways to supplement his income and pass time during the lockout:

He is a mascot. 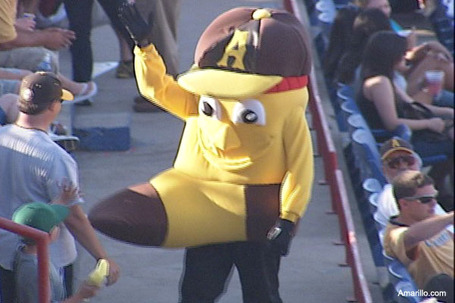 *Note: I do not know that this is Louis Murphy, but it hasn't been denied.

I don't think the Raiders are going to bring in any receivers, but it is still fun to talk about.

Now is the Time for Raiders to Gamble on T.O. " Just Blog Baby | An Oakland Raiders Blog
In case you skipped over the disclaimer above this is by no means an endorsement of Terrell Owens. However, its impossible to have a season go by in which someone doesn’t speculate that Al Davis will pursue a free agent diva head case of a receiver named Owens. So, if ever there was a time for Davis to roll the dice on Owens its now.

Terrell Owens would love playing for Al Davis. He could run deep all the time, and they'd both agree he should get the ball a lot.

Around the AFC West

This is probably more lockout news than Charger news, but there is very little Charger news. I think that is because very few people care about the Chargers. Another reason they'd be perfect for L.A.

Sproles, Chargers teammates expect football to return soon - KansasCity.com
Sproles said he believes something could be worked out soon. "We want to hurry up and get back to playing football," he said. "It seems like we haven’t been playing for a while. We didn’t do spring ball or any of that."

Broncos' Brady Quinn Helps Rookie Julius Thomas Prepare For Transition To NFL - SB Nation Denver
As Mike Klis of the Denver Post reports, Thomas is taking full advantage of the situation by becoming the first rookie to participate in the players' unofficial workouts. In fact, he's working closely with backup quarterback Brady Quinn in order to start the transition to the NFL game, including staying at Quinn's home in Denver. Does Quinn think Thomas can find success in the league? "He's going to have a quick learning curve," Quinn said of Thomas. "We were going over the plays at the house this morning and you saw his ability out there today. I don't think Antonio Gates took a long time, so I think you'll see Julius play right away."

Once the lockout ends he can catch passes from an NFL caliber QB.

The Chiefs ruled the linebackers ratings. But not as much as the Raiders dominated the D-line rankings. Suck it, Chiefs!

Kansas City Chiefs Boast Top Two Linebackers In AFC West - SB Nation Kansas City
The Kansas City Chiefs boast the top two linebackers in the AFC West according to a recent column by ESPN's Bill Williamson, a major reason why the Chiefs defense played a major part in the team's resurgence. Whether it's the presence of Romeo Crennel organizing the schemes and calling the plays or just the talent that would have eventually broke out anyway, both Tamba Hali and Derrick Johnson are exciting athletic playmakers who have as much skill at the position as anyone in the division.

This ominous report from Jay Glazer sparked a bunch of speculation:

Here is a snippet of the above video, if you'd rather read:

NFLPA boss DeMaurice Smith to players: No agreement in near future - NFL News | FOX Sports on MSN
Smith began the call by informing players — 50 Pro Bowlers were given call-in information, but the number of participants is unknown — that recent reports by certain news outlets were way off. That is why Smith wanted to tell players they still haven’t gotten a good enough offer from the owners to bring to them just yet.

Okay, so there are two schools of thought here. This leaked information could a true assessment of the negotiations, or it could be a bit of posturing to help their position. Many seemed to believe the latter. Like CBS' Mike Freeman:

NFL.com's Alber Breer thinks it is more posturing as well:

Albert Breer (AlbertBreer) on Twitter
Can't believe the hysterics I'm seeing here on the CBA talks. Calm. Down. Folks. Jay's a great reporter. Does a lot of work for NFLN. I'm sure it's dead on. But Smith has to manage expectations right now. 6 hours ago via web

Mike Florio is on the side that the sides really are farther apart than the majority of us would like to believe:

Glazer: De Smith tells elite players a deal isn’t close | ProFootballTalk
The reality, as we’ll explain in a separate post, is that the parties aren’t close. As you might imagine, each side has a version as to why the two sides aren’t close.

Below is part of that separate post, and I must caution you: it is disturbing.

Is De Smith willing to do a deal? | ProFootballTalk
The real question is whether De Smith has the desire and the will to force Kessler and Quinn to focus on the issues important to getting a deal done, and whether Smith ultimately has the nerve to stand up to them when the time comes to do a deal to which they very well may object, given the league’s perception that Kessler prefers to lose a season (or more) in the hopes of pursuing an antitrust verdict so large that the players ultimately would own part (or maybe all) of the league.

Wow! What would the NFL look like if it was owned by the players? And if I may make a suggestion: Let's junk the trial greedy lawyers.