With all of this lockout idle time I figured it'd be a good time to look back at some of the players that have helped build the Raider mystique. The history of the Raiders is littered with some of the most interesting players in the history of sports. For some of these guys their stories off the field are more interesting than the ones on it. I already threw one such guy into the spotlight: John Matuszak.

I now am going to try and capture "The Mad Stork." Not only is Ted Hendricks a unique personality in the football world, but he might as well have been what Hunter S. Thompson was talking about when he said:

One of God's own prototypes. A high-powered mutant of some kind never even considered for mass production. Too weird to live, and too rare to die.

Hendricks was a walking study of contradictions. Jump over for more....

Consider this quote by former teammate Ken Stabler: "Most Raiders loved to party, but Ted Hendricks was a party all by himself." Remember, this is Ken Stabler we are quoting here. If Stabler is putting someone above and beyond in party standards than we are talking about a definite overachiever.

He is also the players that prompted John Madden to once say, "Ted's elevator doesn't go all the way to the top." Madden wasn't saying that because he doubted Hendricks intelligence. He was famous for his intelligence on the field. Hendricks had unprecedented freedom on the field as a Raider. He essentially free lanced on every play, and he did it well.

Hendricks wasn't just football smart either. He was a physics major at the University of Miami and he liked to relax by solving math problems.

Hendricks was already a legend before he came to the Raiders in 1975. His amazing career as defensive end at the University of Miami earned him a membership in the College Football Hall of Fame, but due to his slender frame he lasted until the 33rd selection in the 1969 Draft when he was taken by the Baltimore Colts. 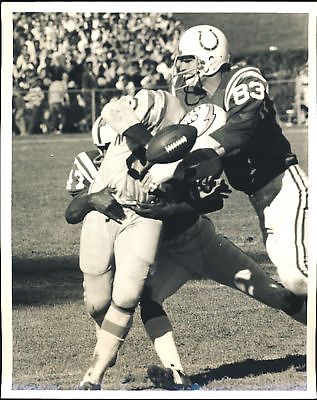 Hendricks moved from the Colts to the Packers in 1974. He played only one season for the Packers, and in that season Hendricks recorded a mind boggling five interceptions and seven blocked kicks, and with that under his belt he was onto the Raiders (after Al Davis gave Green Bay two first-round picks). 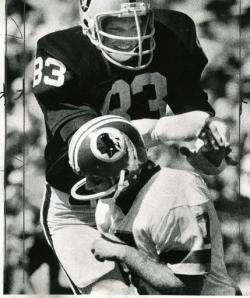 Hendricks' playing time was limited with the Raiders initially as he had a slight feud with Al Davis. He was also asked to switch from the strongside to the weakside due to Phil Villapiano manning the right side. Initial issues with the Raiders didn't stop Hendricks from flexing his personality.

Hendricks showed up for his first day of practice with the Oakland Raiders in his jersey with a German-style spiked war helmet while riding a horse. He held a traffic cone for a lance.

This was not his only instance of costuming. He showed up for one Halloween practice wearing a pumpkin for a helmet. There is also the famous shot of him from Monday Night Football on the sideline with a mask. 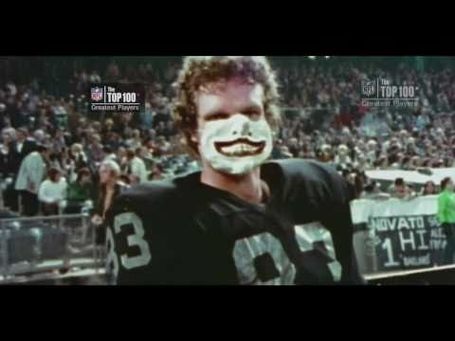 He used to also put on shows for onlookers at the Raiders' practices by lifting a barbell on the sideline with weights marked 500 pounds on each side. The weights were actually hollow—Hendricks hated lifting.

While with the Raiders Hendricks earned another famous nickname: "Kick 'em in the Head Ted." Hendricks used to routinely jump over blockers in games, and one day in practice he knocked out fullback Marv Hubbard with an attempted blocker hurdle.

And while Al Davis' feelings on Hendricks played into Hendricks getting off to a slow start with the club it was his feelings that cemented the fact that Hendricks is largely remembered as a Raider. According to Wikipedia, the Raiders' coaching staff voted to release Hendricks after the 1979 season. Al Davis wasn't having it.

Hendricks played four more seasons—arguably his best four as a Raider. He made the Pro Bowl all four years and was All-Pro twice, and this is largely the reason why Hendricks is in the Hall of Fame as a Raider. 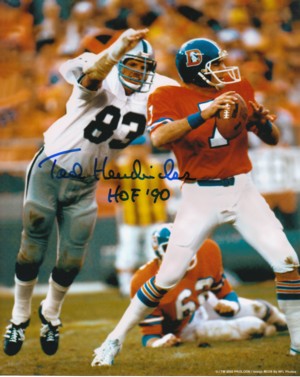