The Oakland Raiders training camp has transitioned more into the kind of routine that you'll find during the regular season and that is because this is a game week. The Raiders spent the day working on game specific situations like the no-huddle, red zone and goalline drills.

Nick Miller is apparently out. I have no idea for how long. Hue Jackson is not big on disclosing such things. It is going to be worth watching because he is really the only one on the roster with punt returning experience. Jacoby Ford is currently listed as the backup punt returner, but he is out with a broken hand. Denarius Moore is third, and this is the one area in training camp where he has struggled. I think we will get a first-hand opportunity to see how he does in a real game on Thursday. I expect Shaun Bodiford will get a chance to return a punt or two as well.

Jump over for more notes and pictures. The pics come to us from Raiders.com. The notes are from information via the notes of Jerry McDonald and Steve Corkran. 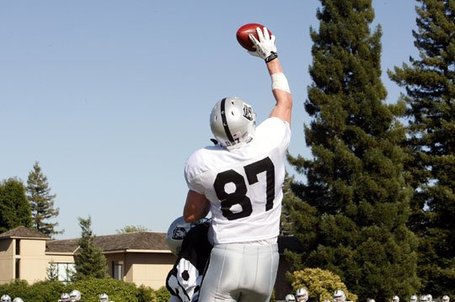 Kevin Brock is probably a long shot to make the roster, but he has had a solid camp. 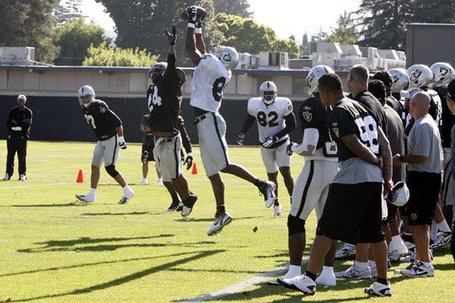 And the best bit of promising news out of Tuesday's practice was the rookie TE David Ausberry had a spectacular day. Check out this tasty one-handed grab: 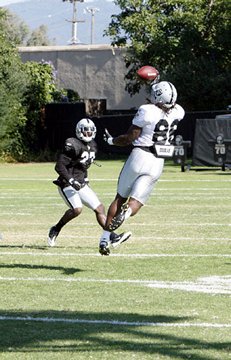 WR David Hagan needs one of the punt returners to look solid in Nick Miller's absence because he is probably fighting him for a roster spot. He is having a solid camp. 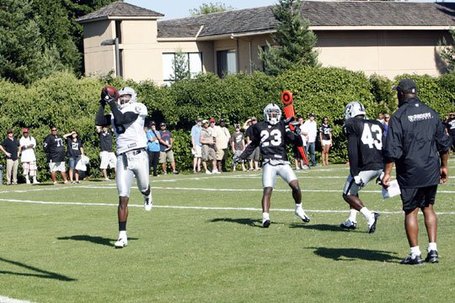 Camp sensation Denarius Moore continues to impress. He had one drop on Tuesday, but he had a few great plays. 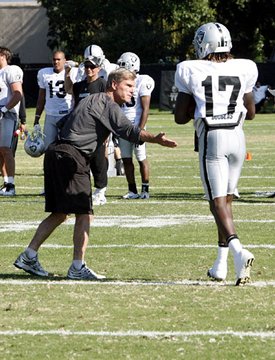 Sterling Moore continues to make plays at camp. He is definitely going to be one to watch in the preseason games. He is going to have to make plays in the peseason if he wants to make this team. 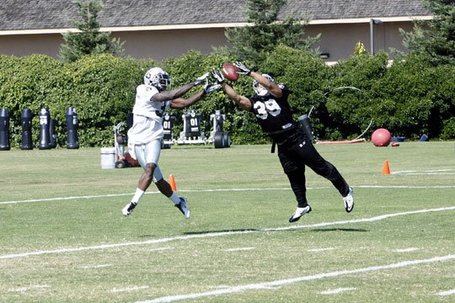