Share All sharing options for: Saint and Noontide's Quest to Find and Infiltrate Raiders' Training Camp

*Updating the Quest: Players are roaming in and out of the perimeters of are undisclosed location. They are looking relaxed fit and ready to roll. Jacoby Ford was sporting a full forearm cast. Hue Jackson walked in earlier too, and if he is upset about losing Miller he isn't showing it. He was as positive as ever.

So, Zach Miller is gone. Bummer. Next guy up is now in full effect. Luckily for us there are plenty of next guys. Hopefully one of them is decent.

Anyway, we are still trying to find a way into training camp. I expected this to be a little easier than it is proving to be. Although you would think I would have learned better by now. This is the Raiders we are talking about. We are driving around the quaint little blocks of Napa searching for the Raiders training camp site. And get this: they actually practice at a middle school.

We thought we had found the Raiders site when we stumbled upon this spare no expense training equipment. 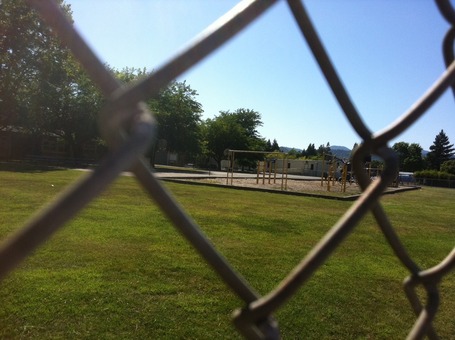 As fancy as these facilities are, this is not the home of the Raiders. This is a lowly elementary school. So we forged on. We came across another field that is in plain view of the street and thought we had found it. "This is perfect! We can just sit right here and watch from the car!" I told Saint.

"Let's ask this guy." Saint said while pointing to a guy watering his asphalt (no joke?). "Hey is this where the Raiders practice?" Saint asked.

"Nah, it's down the road to the left. The fences are covered with black tarp so no one can see in. They don't let anyone in. In fact there is a two-story apartment building looking over the practice field. In the second story there are a bunch of old ladies with Alzheimers, and Al Davis was convinced they were stealing his plays."

"Sounds about right," we said and trucked on. Well, we found the hallowed ground and arrived just in time. Not for practice or anything, but just in time nonetheless. 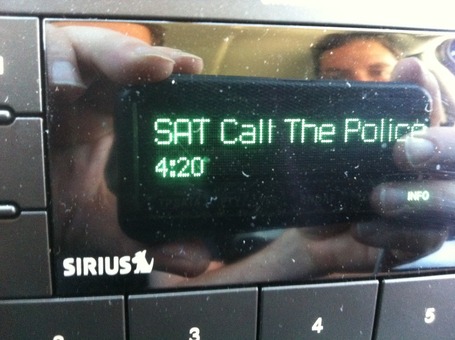 Alright, that is the scoop...so far. Don't worry. We will not rest until we get you more of this exclusive inside(ish) look on training camp.