I woke up in my clean tiny box of a Hotel room on Wednesday morning happy to be in Napa, but resigned to the fact that my access was destined to a resourcefully clandestine nature. I met Saint in the lobby of a local hotel to see what our ears could catch floating in the breeze. I walked in and found Saint posted up with one eye and hand on his laptop, one hand and eye on his I-phone and a quarter part of each eye on the courtyard. The guy is one hell of a multi-tasker.

Saint looked at me and gave me a head nod to the courtyard, "There's our in, Amy Trask is in the courtyard having lunch with Hue Jackson. She came by our tailgate at the Freddy B golf tourney, maybe she will let us cover training camp"

Just as quickly as he said it they got up and made their way to a back entrance from the restaurant courtyard. The queen had scurried off, undisturbed, through the part of the hotel that only the Raiders are allowed to enter. It was not a surprise. Throughout this process, what was already clear has turned crystal: the Raiders only allow access to a select few, and they allow them access to only the things they want accessed, and Amy Trask being pestered by bloggers for a press pass is not one of those things. Jump over....

We were undeterred, and we made our way to the field. We pulled up to the parking lot right next to the field that is strictly on lock down status. A chain link fence covered in black plastic surrounds the entire field. In almost every spot, the fence is too high to peer over. However, the fence is only six feet high for a section on the back edge. We could definitely sneak a peak there. Not that I would do that, but if I did, it might look something like this: 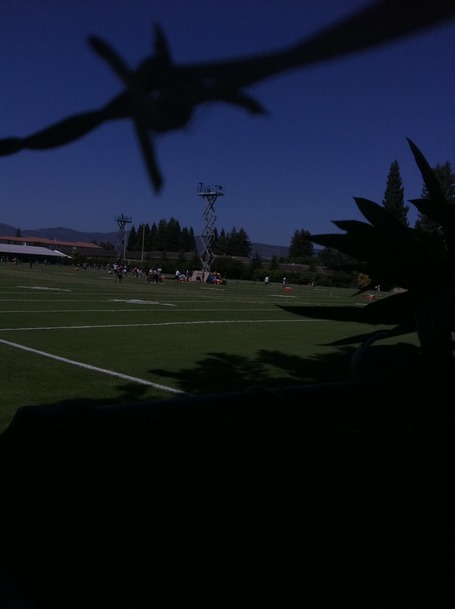 The reason I would never do anything like that is because the Raiders' security staff is "Johnny on the Spot." Had someone headed to the corner by the trees where they could harmlessly stick an I-phone over the fence for a picture, the security staff would surely walk right over and say, "Hey, this is a closed practice. I am going to have to ask you to leave."

Obviously, I would never do such a thing. But while I was busy contemplating not doing this, I discovered that in my state of non-disclosed pre-occupied activity, that Saint had been kindly asked to leave the parking lot. No worries. I walked around and spied for a way to get in until Saint drove up. "Hop in, dude! I think we have an in."

Saint and I stumbled into the hotel adjacent to the field and entered the Raiders media room, and were promptly grilled and put under the kleig lights. "Why are you here? Who do you work for? What's that? A blog? SB Nation? Comcast? What's your guy's name at Comcast?"

"Well, we don't really have a contact name for anyone from Comcast. They are just sponsoring us. SB Nation sent us down here on a wing and a prayer. Here, I can show you some emails." Saint said while one of the assistants scoured Silver and Black Pride for any reason to not let us in. Meanwhile, I braced my self for harsher interrogations. I don't think the Geneva Conventions cover the Oakland Raiders. Ultimately, Saint's amazing interpersonal skills saved the day, and my ability to fool them into thinking I was a legit media type was enough.

And guess what? They printed us off a press pass. 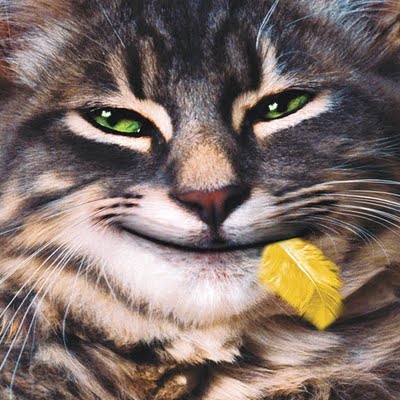 And onto the field we took Silver and Black Pride. Don't believe me? Check it out: 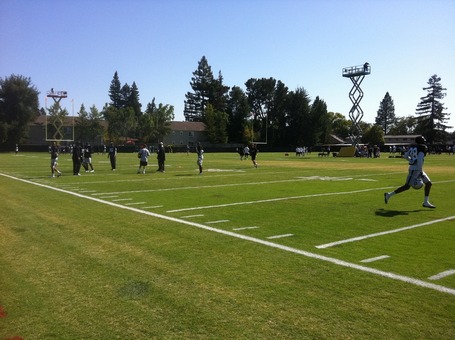 Once I reached this position on the field, it took everything I had to restrain myself from running straight across the field yelling, "Hit me! I'm open!" The field is beautiful, green and lined. There were footballs laying all over the place and dudes throwing them around right in front of me. It was unnatural to be relegated to a little red box on the sideline and watching. And we didn't even have a football for later! Other than that the day was a great success.

Follow S&BP on Twitter for our in-practice updates, and we will also be back with a recap in one or multiple form.