Share All sharing options for: 2011 Oakland Raiders Training Camp: Verifying Memories of My Trip to Napa

The thing about flying is that it is not natural. Humans just weren't made to travel that fast. It's like the brain rejects the notion that memories so closely connected in time could span such a vast physical distance.

I don't know how else to explain the fact that as I sit on my familiar couch, I am scratching my head and thinking, "Was that real? Was I really just at the Oakland Raiders training camp?" I have to check the few pictures on my phone to reassure myself I wasn't dreaming. Jump over for reality verification and more useless details....

Yep, there is the box of a hotel room I slept in. 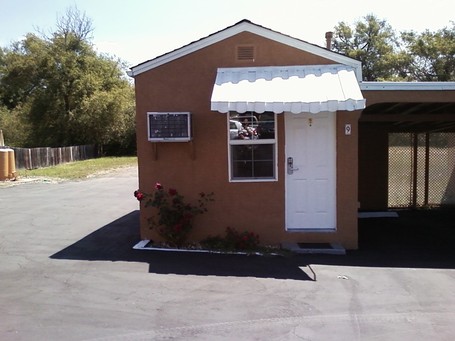 In light of all evidence pointing towards the fact that I indeed made this trip, I would like to thank the Oakland Raiders for allowing me an opportunity to watch them to practice for two days. While it took us a while to gain access, once Saint found Mike Taylor, the Raiders' public relations director, things were a breeze. The staff was cordial and accommodating. They also allowed us more freedom than their reputation suggests.

Saint and I are just couple of bloggers, who are not bound by laws, rules or etiquette of traditional journalists. Yet as we got ready to head for the field for the first time, Taylor laid out the ground rules simply by saying, "Just follow the rest of the other guys. Don't write what they write; you guys do your own thing, but watch them to know where and when to go."

As it turned out, there were only three rules:

2) Take all the pictures and video that you want until they start the team portion of the practice.

3) Say what you want, except in-depth details about plays, trick plays etc.

There was no topic or person that was off-limits. After the practice, we could approach any player and ask them for an interview. Not surprisingly, some of them are a lot more open to interviews than others. I thought for sure I was going to get an exclusive interview with Rolando McClain. I didn't.

Other than that failed interview, I really entered camp with no plan. The first day, I walked onto the practice field with my laptop, its power cord and the bag I was carrying them in. While these tools often come in very handy, moving around on the sideline of a football field in the washout light of a blazing sun, is not one of those times.

Looking at the veteran writers on the sideline, it was apparent that a pen and a pad of paper were the preferred on-field tools of the trade. So that left me with 21 hours to come up with a pen and a pad for the next days' practice. In the span of those 21 hours I managed to show up the next day with:

Of these two items, the energy drink proved to be the one that was useful. After Saint was kind enough to give me three sheets of paper, my pen died halfway through the first sentence. I borrowed Saint's pen, and I used the can of my energy drink to write on.

So there I was scribbling notes on loose leaf paper on an aluminum can, when the voice of Hunter S. Thompson crashed into my head, "Well, this is how the world works. All energy flows according to the whims of the Great Magnet. What a fool I was to defy him."

I decided I didn't want to waste my time taking notes. I wanted to see and take in as much as I could while I was there. I have lived the Raiders vicariously through the notes of others. I already know that world, and I know all of you know that world, too. I wanted to focus on all of the things that happen in between the notes. I wanted the black matter of Raiders practice. My hope was I could come away with a unique take, and in turn provide some details to SABP. Details that maybe some of you have wondered about, too.

I'll have the black matter tidbits posted tomorrow, but first I must finish the story at hand.

At the conclusion of our first day at practice, Saint and I went to the lobby/bar of the hotel by the field where the players stay. Above us was the media room where all the other writers bang out their stories, but we had no idea how this worked. So we made HQ at the bar.

As the Great Magnet would have it, that was the place to be. As I was typing, Kevin Boss, his agent and Hue Jackson sat down for dinner in the table behind us. I listened with great interest as I typed. My intention wasn't to report anything I heard while eavesdropping. If they thought they were discussing something in private, I wasn't going to write it, but I was sure as hell going to listen. At that point, I was just a curious fan. It didn't matter anyway. After they ordered they opted for a more private setting outside.

"I see you typing away over there." Hue Jackson smiled at us as he walked out of the bar.

The second day after practice, we hit the media room with the rest of the writers. However, my innate inability to plan ahead struck again. I had checked out of my room earlier that day, and I had left my laptop in Saint's car, which was now being driven around Napa by Saint's lovely wife.

That left me standing in the media room looking over the shoulder of Saint and the other writers as they banged out their stories. Not only did I feel lost without my laptop and frustrated by the inability to talk about everything I just saw, but I felt like a total tool. I was just some dude standing around in the media room while people, far more professional than I, were working. I needed to get out of that room.

So, I headed down to HQ for a drink of water. The plan was when Saint was done, I would use his laptop, bang out the practice notes and we would head back to Oakland when his wife arrived. I bellied up to the bar with a glass of water, and snapped the following picture knowing that I was going to need hard evidence that what I just did actually happened. 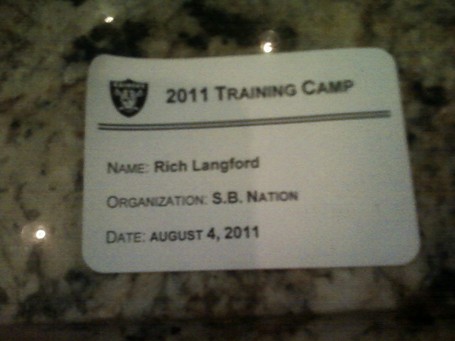 As I was sitting there the bartender asked me if I wanted a big glass full of a stiff Long Island Iced Tea that someone had ordered but disappeared. A cute little unaccustomed feeling of professionalism washed over me. "Just say no. You are supposed to be headed back to the media room so you can write fast before you have to go. You don't see any of the real journalists down here drinking."

But that feeling quickly evaporated as Hunter's voice rioted back in, "All energy flows according to the whims of the Great Magnet."

"Yes, I will take that drink, kind sir. And while your at it—you may as well poor me a glass of that delicious Racer 5 IPA I have heard so much about."

Not long after that, I received word from Saint that it was my turn to type. So I pounded the tea, beer and water in that order and went up to the media room. Doing so, I was pretty sure that I had just doomed myself to being known as "that guy" amongst the small pack of writers. You know the one that takes no notes, has no laptop, disappears and then reappears reeking of alcohol.

However, I've never been one to let perception get in the way of the pursuit of my desire, and I wasn't going to start there. Me and my fast rising buzz banged out the 8/4 practice notes in 20 minutes. With that, I was out of there—back in a car,  then back on a plane and then back home.