Richard Seymour Would Make an Imposing Lefty Out of the Pen

Share All sharing options for: Richard Seymour Would Make an Imposing Lefty Out of the Pen

Richard Seymour threw the first pitch at tonight A's game. He is one intimidating lefty on the mound. The baseball looks like a golf ball in his giant skull crushing hands.

I wish I could find video of this. I am always fascinated at how horrible some really great athletes are at throwing out the first pitch. Carl Lewis and John Wall come to mind. Their efforts were barely better than a half naked Mariah Carey dropping the ball on her stilettos in Japan.

I was at a Mariner game where Marcus Trufant threw out the first pitch. It was awful—went about 40 feet. I was at another game when Eddie Vedder threw the first ball. He rifled about a 55 MPH strike right down the middle. That's like a billion MPHs in first pitch terms.

Even some former baseball players throw up some horrible first pitches. Reggie Jackson missed the catcher by about 15-feet the other night at a Yankees game. I really don't get it. A baseball is the easiest thing in the world to throw. It is the perfect size, weight and shape. It is a true oddity of the universe that people struggle with this.

One of you must have seen Seymour's pitch? How was it? His form doesn't look to bad. He has a nice grip. Although, if I was guessing, his release point looks a little off. I'd say this one bounced before it got to the catcher. 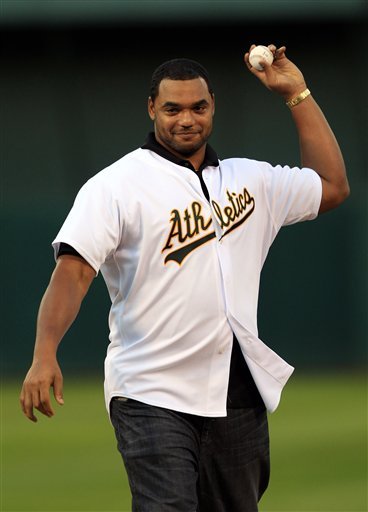