Share All sharing options for: Raiders vs. Bills: Raiders Will Bully Bills O-Line

When the defensive line dominates, the Raiders win. If they are going to win this game, they will need to win it up front. Otherwise, the Bills spread out passing attack will kill the Raiders.

The Raiders need to stuff the Bills runs at the point of attack and force the Bills into passing situations where they need to run pass plays that take long enough for Fitzpatrick to be heavily assaulted.

The good news is that the Bills offensive line does not matchup well with the Raiders defensive line.

Jump over for the matchups below, with a breakdown of the Bills player from Week 1 by Buffalo Rumbling's, Ron From NM....

"[Bell] had 15 decenst run plays along with two bad ones. On the fourth run (first drive), ]ell let Tamba Hali rush upfield, but didn't stay with him. ...He graded out at 72.7% on run plays.

"On pass plays, Bell had one good play, 14 decent and two bad. His one good play (pass No. 14, fifth drive) was a cut block on a linebacker to open a great throwing lane which was squandered by a bad pass." 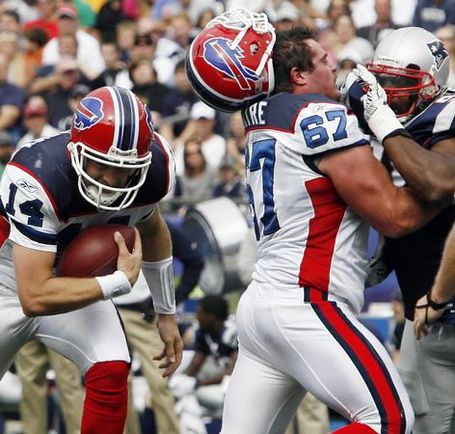 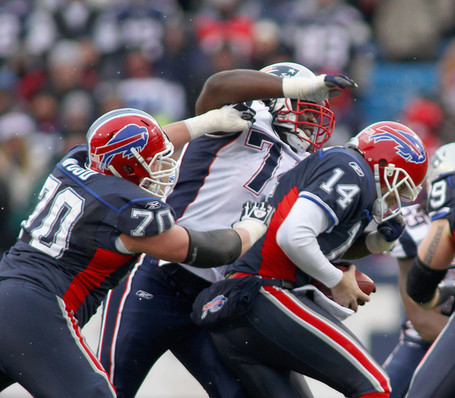 "He did give up a sack in the second half to kill the opening drive, but was solid in the first.

"As long as those five guys stay healthy and develop some sort of consistency, Chan Gailey can work with them. Even if they're consistently bad, Gailey and Ryan Fitzpatrick are smart enough in tweaking protection schemes to give themselves time in the passing game.

"They're more of a move and seal run-blocking unit than a power-based drive-blocking unit, but they can be effective running the ball that way. They're weak at tackle in pass protection, so you'll see a lot of backs and tight ends chipping and the like.

"The leader of the group is unquestionably center Eric Wood, a 2009 first-round pick who is not perfect as a player, but whose mean streak has pervaded the group's playing mentality. This line isn't overly talented, but they're physical and come to play."

The Bills offensive line could be called average on good days. The Raiders defensive line is the heartbeat of this team. They should dominate every matchup, including when their backups come in.

The said, the Bills offensive line did a great job last week. They averaged 4.2 yards on 39 carries, and they only allowed one sack. This is a big test for them. I'm sure they are looking at this as an opportunity to prove themselves here.

I don't think a positive mental state is going to help them win this matchup though.