The Raiders just put out one pathetic effort against the Seahawks. They were sloppy and outplayed. Fatal flaws killed drives on offense, and let the Seahawks convert on offense. The Raiders have a lot to fix before the season.

The worst part of this ugly performance was the ineptitude of the offense. The first team (except Bush) offense played three series and managed only  three points. We're not talking about the Steelers defense. The Seahawks' defense is bad. And it got worse.

One positive was the Jacoby Ford played and looked solid. 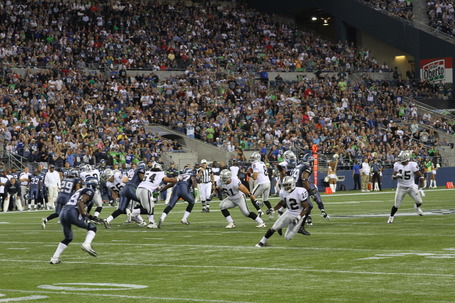 The Raiders third drive was against the Hawks backups. And the offensive line failed to let the run game assert itself. Michael Bush had six carries for 24 yards, but 14 of those were on one carry. The Raiders offense had way to many 0-2 yard carries tonight for their offense to run like it is designed.

Pass protection was solid. Jason Campbell was 8-11 with 76 yards. But too many of those passes came up short of the sticks, and this team was not converting first downs. They didn't convert one in the first quarter, and they were just 4-14 on third downs. 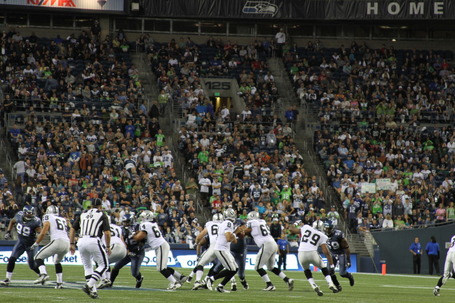 There were two bright spots in this game. The run defense and Stanford Routt.

This was by far the best performance on run D. Justin Forsett and Leon Washington got all the early carries for the Seahawks, and combined 28 yards on 13 carries.

The defensive line can be thanked for the improvement. They were absolutely dominant. Seymour didn't play, but the rest more than picked up the slack. All of the regulars had great games on the D-line. 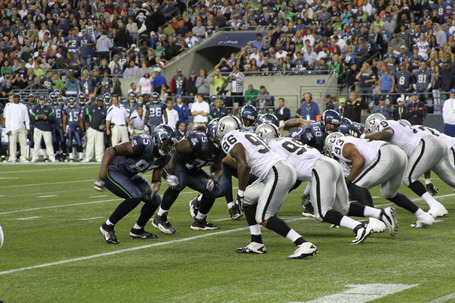 The problem in this game for the D was the pass defense. It was awful.

The Raiders got decent pressure, but Tavaris Jackson and Charlie Whitehurst bought time with scrambles and the man-to-man defense would crumble. When the Seahawks passes were complete they weren't completed on Routt's man.

Routt was fantastic. He looked like a very legit No.1 corner. He made a brilliant play (check out photos below) on a quick-in in the endzone. Routt was stride-for-stride and knocked the ball into the air where a sprinting Tyvon Branch could grab it. 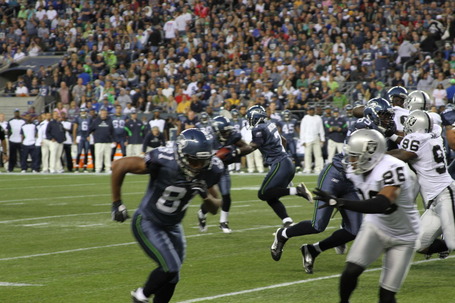 Little else worked in the passing D. Tavaris Jackson and Charlie Whitehurst combined for 14-22 for 228 yards and one touchdown. That is bad. This performance was bad, and it only affirms the negative trends of the preseason.

The starting defense has yet to put a complete game together. They either get torched on the pass or the run.

The starting offense can't get into the endzone. The Raiders will have some key players back for the opener, but they have a lot of work to do if they want to be anywhere near .500.

He had amazing position on this slant. He knew Tate was running the slant and he beat him to the ball. Wonderful CB play. 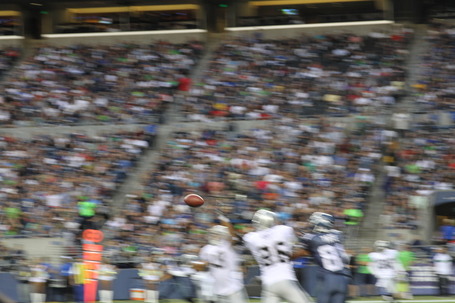 He got his hands on it, but couldn't hall it in and tipped it up in the air... 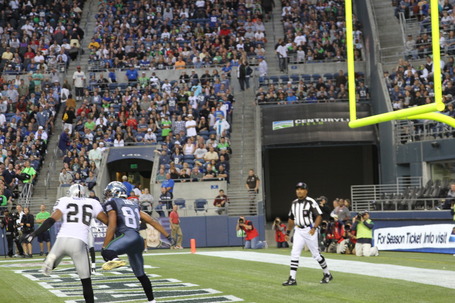 right to Tyvon Branch who was ready to take it back 33-yards. 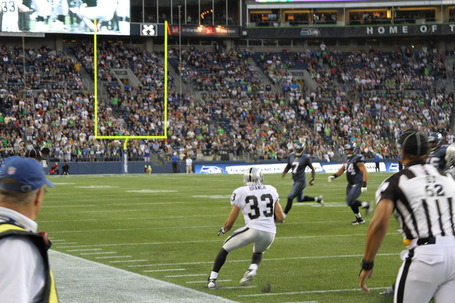