The Oakland Raiders took on the Seattle Seahawks this past Friday evening. And even though Oakland lost the insignificant preseason game they did have improvement along the offensive line.

Note: This post comes to us compliments of Bewsaf.

In this post, you will find a film breakdown of every offensive play in the first half (we will break down the entire game when the regular season starts). After breaking the film down, you will find grades and notes that might help you understand what you might have missed in the trenches while the play was going on.

In the Seahawks game khalif Barnes has a 75% pass blocking grade but scores a +2 in dominance blocks. A couple of times, three actually, Barnes uses a good punch to control the pass rusher and keep him off balance.

Last week the offensive line had problems. This week the Raiders front 5 had good games, generally speaking. Daniel Loper subs in for Stephen Wisniewski and on his very first run play he puts a defender on the ground.

Lets look at those offensive line grades for the first half only.... 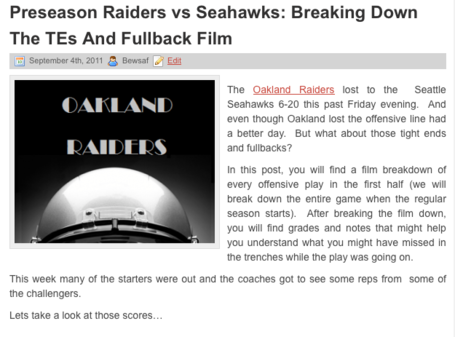