Well things certainly didn't go as expected on cut down day. As Saint pointed out, the Raiders cannot be done. It just doesn't make sense to carry two QBs and six running backs. I have no idea what the plan is with QB. As Saint also suggested it could mean they plan on appealing Pryor's suspension. If that was the case though, wouldn't they have already started this process, and wouldn't they have kept Edwards until they did?

My only guess is that they didn't like Edwards, cut him as a favor so he could find a new team, and have their eye on someone else.

I can not think of one single logical, practical or good reason to carry Michael Bennett. Jump over for more....

I see Sons Joker and I raise him the Riddler.

Riddle me this? What the hell is Michael Bennett's purpose on the Raiders. 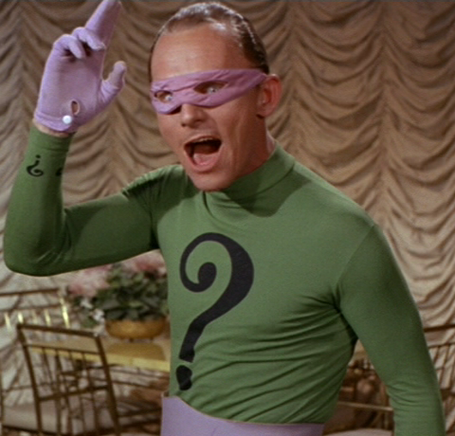 The only contribution he makes to the roster is being the fourth best running back. You just don't plan ahead for your fourth running back having to play. If anyone sees the angle on this, I am all ears. This is about the most baffling roster move I remember.

I was surprised that Richard Gordon made this team. He is the fourth tight end. The Raiders only carried two last year. I had Gordon pegged for getting axed and then getting signed to the practice squad, which could still happen when Kevin Boss returns from injury.

The Raiders also kept seven receivers. They made room for Nick Miller. This would seem to suggest that they want Miller returning punts. That's fine with me. Jacoby Ford is too valuable to have him returning kickoffs and punts. Denarius Moore looked like a good option at punt returner, but I'm all for him focusing on playing receiver.

Sterling Moore was cut, but I think we will see him on the practice.

Another semi-surprising move was cutting was keeping Seth Wand over Daniel Loper on the offensive line. I never thought for one moment that Wand would make the team, and therefore I spent little time watching him.

I did know that Loper played well enough to be cut. He was garbage this preseason. I'd keep an eye on the Raiders adding another offensive lineman soon, and Michael Bennett probably losing his spot then.