A new map created by Facebook to track where fans of each team reside has come out. It may be the most accurate regional fan map ever put together and it has some pretty fascinating discoveries.

There have been a lot of attempts over the years to take polls of fans in certain regions to figure out the greatest portion of fans for which teams but it was never very accurate. This map was made from those facebook users who "liked" a certain team on their pages so no poll was necessary. The information was already there. The results are pretty interesting. 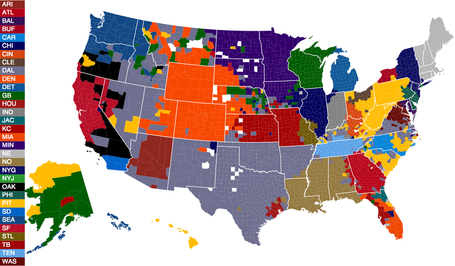 Let's start with the Raiders.

First off, it is clear the 49ers rule the roost in the Bay Area. Hey, people like winners. While there are undoubtedly plenty of Raiders fans there, their numbers are dwarfed across the board by the Red and Gold. But all is not lost. The Raiders have them surrounded.

What is pretty impressive, especially for a team which has not had a winning season in over a decade, is how strong the fan base is in the areas surrounding the Bay Area. This includes half of Oregon, most of the central valley and Mojave desert and parts of Nevada.

There are a few other interesting observations:

The Cowboys may just be America's team after all. Their path of fan following. They fans cover the better portion of six states and good sized portions of several others as well. They own Oklahoma completely, most of Texas, New Mexico, and Arkansas and more what appears to be more than half of Nevada and Idaho.

Just behind the Cowboys are the Broncos and Patriots. The Broncos hold down the great plains of the Midwest while New England has just one unfaithful county to their beloved Patriots.

There are only a few states in which every county leans for one team. Seahawks own Washington state, Broncos own Wyoming (one Colorado county going to Cowboys), Vikings own Minnesota, Packers take Wisconsin, Saints got Louisiana, and as I mentioned, Oklahoma is all Cowboys and every friggin' state in New England is about the Pats.

I don't know what's going on with Alaska, Hawaii, and Montana. Alaska appears to be made of mostly of Steelers and Packers fans and Hawaiians like the Steelers? Um, ok. Montana is an odd calico of Broncos, Cowboys, Packers, Vikings, Steelers, and Seahawks fans.

If you want to take this a step farther, check out their succession of maps in each round of this year's playoffs. 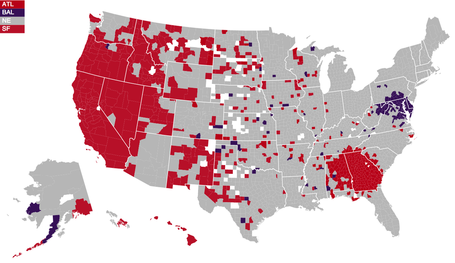 The most interesting observations I found were between the Conference Championship weekend and the Super Bowl. Most of the country was all about the Patriots with West of the Rockies (except Seattle and Arizona areas where they hate the 49ers) was primarily 49ers. The Falcons and Ravens had only their home states on their side. 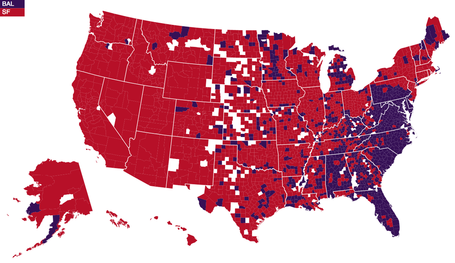 With the Super Bowl, most of the country is now for the 49ers with just the Southeast (the anti San Francisco) pulling for the Ravens. Then there's the speckling in the Midwest of people who will be watching the Puppy Bowl instead.