Share All sharing options for: Raider Nation revealed: Looking beyond the costumes

The Oakland Raiders have an amazing fan base. They dress up like Halloween every Sunday for their team and they look terrifying while doing so. The Raider Nation even has some of the most recognizable fanatics in sports with Gorilla Rilla, Violator and others but have you ever wondered what they looked like behind the costumes and face paint?

One person  in particular who was curious about unmasking some of the more infamous Raiders fans was ESPN the Magazine’s Sam Alipour. Last week "The Mag" put out their first ever "Bay Area" Issue dedicated to the great fans of all the Bay Area sports teams, which of course cannot be written without speaking of the Raider Nation. Sam took the opportunity to get to know some of the more notorious fans beyond their make-up in his "Putting on Their Sunday Best" article.

Let's start off the introductions with one of the most famous fans of the Oakland Raiders. His prep time isn't as hardy as others at 25 minutes but you try wearing a giant monkey suit in the California sun. Here is 44 year old Mark Acasio, more lovingly known as Gorilla Rilla: 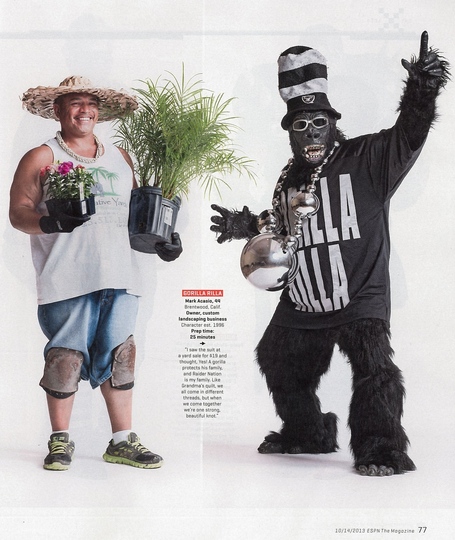 Now don't go thinking the passion shown for the Raiders is only by the fans lucky enough to have been old enough to see the Raiders when they were winning. The young get in on the fun too, just look at "Drea of the Dead". She is only 18 but shows just as much love as her older brethren by spending two hours getting ready for her favorite team. 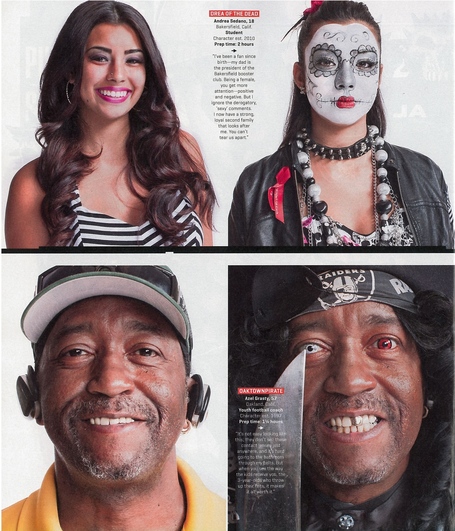 Pictured below Drea is one of the true pirates in the sea of fans at Raider games, 57 year old youth football coach Azel Grasty. His alias is "OakTownPirate" and nobody needs to bother asking why. It isn't easy going through his hour and 1/2 of prep time before the game but each time he sees the next generation of fans reactions he knows it was all worth it.

The next fan highlighted is one that any one of us would be proud to call Ma! The loyalty shown by this fan is hard to match considering she legally changed her name to show her love of the Raiders. 65 year old Raider-Gloria Malvaez, or just "Raider-Gloria" for short, takes 2 1/2 hours getting ready, but she can cut it down to 90 minutes if she is laying off the hooch. 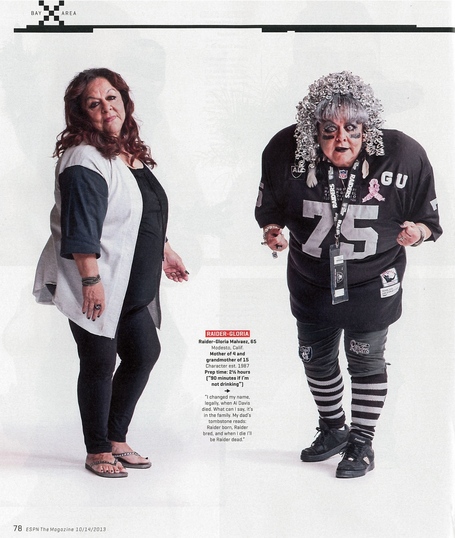 The next two fans highlighted in "The Mag's" article get to share their love of the Raiders together. Cindy Reyna, 27, takes 45 minutes to get ready but her fiance John Silva, 34, takes even a bit longer at an hour to get his look together. They go by the nicknames Metal Cindy and El Cucuy. 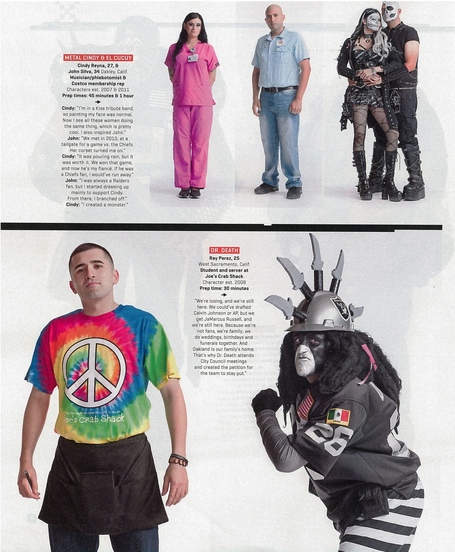 Below the lovely yet menacing couple is 25 year old Ray Perez who goes by Dr. Death. It only takes him 30 minutes to become unrecognizable with his face paint and dreadlock wig. Not only is Dr. Death one of the most well known fans, but he is also one of the most dedicated after starting the petition to keep the Raiders home in Oakland.

Last but certainly not least is possibly the most famous but definitely the most intimidating. You won't go a single home game without seeing Violator shown on the television, after all even at 56 he looks like he could still be on the field instead of in the stands. Wayne Mabry is a union carpenter who spends an hour and a half getting ready for Raiders games, but it pays off since he is the face that haunts opposing fans' dreams. 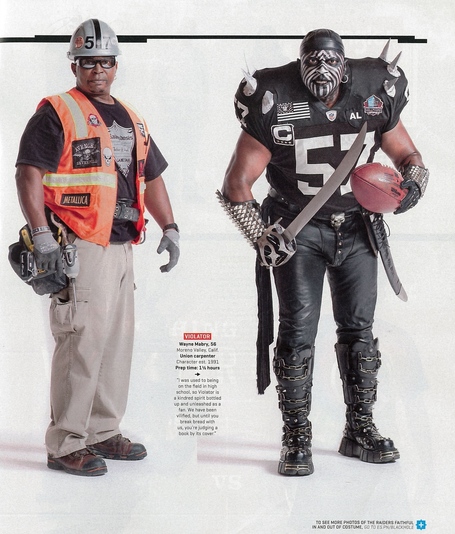 I hope you enjoyed getting to know some of the most well known members of Raider Nation a little bit better. We see these painted faces while watching the Raiders every home game so it is nice to see the faces behind the masks for once. They, along with all of the rest of us die hard Raiders fans, are a key reason that ESPN published an entire issue dedicated to the Bay Area which they have officially dubbed "the most thrilling place in sports". Looking at these fans I have to say they certainly got that right!