Breaking down the Tracy Porter interception return for a touchdown off of Eli Manning in the week 10 match-up between the Raiders and Giants.

Test how precise your football knowledge is by playing the Precision Play of The Week for a chance to win Super Bowl tickets – brought to you by Gillette Fusion ProGlide, precision comfort, even on sensitive skin.

The blueprint for beating the Giants has been laid out this season. The idea was simple: rattle Eli Manning and force him into throwing interceptions. He had thrown 15 interceptions this season coming in and it was the main reason the Giants had gone 0-6 to start the year.

The Raiders certainly didn't get the kind of pressure they wanted on Manning overall, on one particular play, they put together the perfect combination to dial up a pick six.

First off, Tarver called for a safety blitz with Usama Young coming in on the left. Sending Young on a blitz worked earlier in the game for Young to get a sack so the Giants were going to make sure he wasn't left with another free shot on Manning. In doing this the defensive linemen would get single blockers instead of a double team. 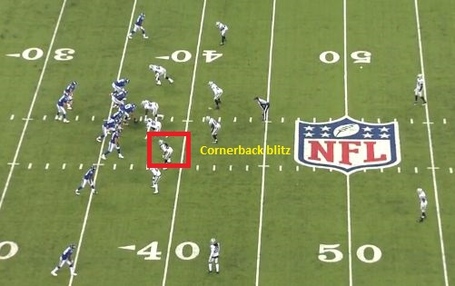 Manning also knew that with Young blitzing, there was going to be a man open. Porter was in a one on two situation. To work this to his advantage, he baited Manning into thinking one player was going to break open. 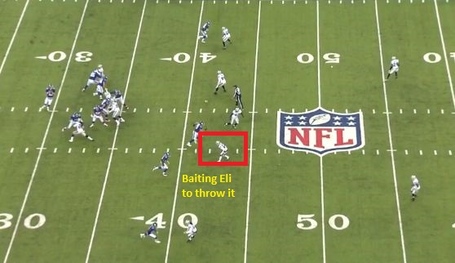 If given time to survey things, Manning may have been able to make a more sound decision, but very quickly he had defensive lineman, Daniel Muir, bearing down on him so he took a chance and took the bait. 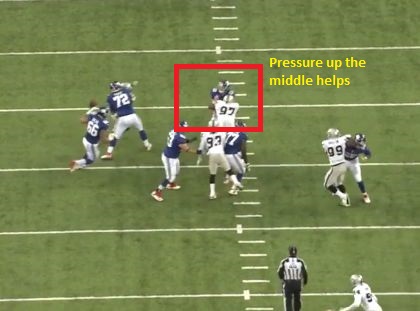 Porter then sprung the trap by breaking on the pass as soon as it left Manning's hands. The result was a textbook, in-stride interception with nothing but open field in front of him for a house call. 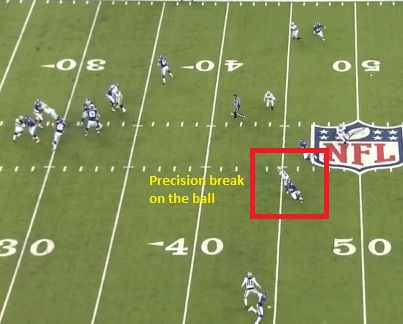 It was the most important play of the day for the Raiders and put them up 17-14 just before half time. A well designed play perfectly executed on the fly.