What does the future hold for Oakland this week against a Kansas City squad that is back on track after a losing streak?

Greetings, Raider fans! It is I, RaiderDamus, the wise, the mystical, the tower of power too sweet to be sour, and the winner of Hermit Idol. I come to you riding a two-game winning streak, by virtue of the Raiders riding a losing streak. Some of you had faith in the Raiders to turn things around and get back on the win column. Your faith has been misplaced. This is the hard part of the season for RaiderDamus, as the remainder of the schedule consists of the other three teams in the AFC West, each of whom I have already written about and I have little desire to do so again. For, I ask you, what can be said about Kansas City that has not already been said by Missouri's most scuzzy single-wide trailer park lot salesmen?

It's difficult to write about either Kansas City or the Chiefs. Kansas City is known for three things: fat, barbecue, and fat people who eat barbecue. As a connoisseur of grilled food myself, I cannot fault the people of K.C. for their proclivity towards it. I can, however, fault them for totally walking in goose-step with the stereotype of Midwestern towns as being very white, boring, and white, and full of boring white people. The most interesting person to ever live in Kansas City was George Brett, who is best known for throwing a bitch-fit on the field of play after being caught red-handed beating the Yankees in a baseball game. He should have known that sort of thing is frowned upon in baseball.

The Chiefs, meanwhile, are the most boring and nondescript team in all of football. The hapless Chiefs have not won a Super Bowl since beating the even-more-hapless Vikings in Super Bowl IV in 1969. They have not been to the AFC Championship game since Joe Montana was their quarterback. This means that the Chiefs drafted Derrick Thomas, made the poor man live in Kansas City for a frightening amount of time, and then never won a damn thing with him. That, my friends, is a crime against humanity.

God does not want the Chiefs to have a good quarterback. If He did, He wouldn't have given them the first pick last year, when there wasn't a quarterback worth taking in the first round much less the first pick overall (looking at you, Bills). This year, there are a number of QBs worth taking in the first, but K.C. won't get any of them because they will be drafting too late and already are committed to Alex Smith. Smith is a great fit for the Chiefs because he is literally the most Kansas City person ever- conservative, white, and mediocre.

The reason the Chiefs are so good this year is because they have upgraded their quarterback position from "very bad" to "okay". This, combined with their good draft record from the last few seasons, makes the team a legitimate contender. Here's a list of some guys they've drafted recently: Dwayne Bowe, Jamaal Charles, Branden Albert, Justin Houston, Derrick Johnson, Tamba Hali, Eric Berry, Brandon Flowers and Mr. Irrelevant, Ryan Succop. They have had a few misses like Glenn Dorsey but for the most part they have uncovered stars well into the fifth and sixth rounds of the draft. They have to do it this way because nobody wants to sign a contract to live in Kansas City if they have other options. Compare that to the Raiders' recent draft record and it's easy to see why the Chiefs are at this juncture the vastly superior team.

This week is going to be a bit different from the first time these teams met, as the Chiefs defense isn't totally healthy, but they are still good enough to plaster a miserable Raiders team which has almost no playmakers on offense and is exhausted on defense due to a lack of depth. 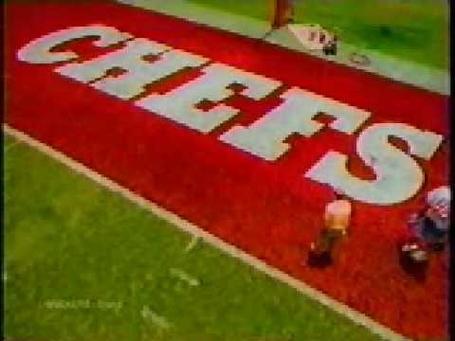