Share All sharing options for: Keenan Allen looks to again make Raiders regret not drafting him

All 32 NFL teams passed on Cal wide receiver Keenan Allen in the 2013 draft. Some of them passed on him three times. Few more glaring than the Raiders.

Allen is the odds on favorite for NFL Offensive Rookie of the Year. He already has the Chargers' franchise record for rookie receiving yards and now he is just 71 yards away from breaking the all-time rookie receiving record (1002). And with two games remaining, it's a good bet he'll surpass it. It actually a pretty good bet he will get the record against the Raiders this week.

I have said in the past that the Raiders had three chances at drafting Allen. Even the mere mention of Allen's likely run for Rookie of the Year has Raiders fans quick to point out the Raiders weren't the only ones to pass on taking Allen. True, but there's a lot more to it than that.

First you have to look at the teams who were even in the market for a receiver. The Raiders were one of approximately 11 teams who had a significant need at wide receiver in last year's draft. The others were the Chiefs, Bills, Rams, Steelers, Vikings, Colts, Packers, Texans, Patriots, and 49ers.

You can eliminate several of these teams because they chose a wide receiver in the first two rounds. Those teams would be the Rams (Tavon Austin), Texans (DeAndre Hopkins), Vikings (Cordarrelle Patterson), Titans (Justin Hunter), Bills (Robert Woods), and Patriots (Aaron Dobson).

That cuts the total number of teams in need of a wide receiver down to five - Raiders, Steelers, Colts, Packers, and 49ers.

Of those six teams, only one of them had three shots at Keenan Allen - the Raiders. Suddenly it doesn't look so much like the Raiders were just as guilty of passing on Allen as the other 31 teams in the league.

The Raiders waited until the seventh round to get a wide receiver when they chose Brice Butler out of San Diego State. He has been active for ten games this season and has nine catches for 103 yards with no touchdowns.

Keenan Allen, on the other hand, has started 12 of the 13 games in which he's appeared and has 63 catches for 931 yards and 7 touchdowns.

To make matters worse, Allen was right in the Raiders' own backyard. He played four seasons at Cal where his superior receiving talents were staring at the Raiders in the face. Al Davis was known for discovering some good talent from Cal that perhaps the rest of the league had missed - Nnamdi Asomugha being the poster boy. Say what you will about Asomugha's career of late, but he was perfectly scouted for the Raiders' needs and was an All Pro corner in Oakland.

Allen had some injuries that were concerning to some teams which is part of the reason he fell to the third round at all. But considering the injuries to the Raiders top two picks, D.J. Hayden and Menelik Watson, and Keenan Allen's clean bill of health all this season, that concern just seems silly now.

The lone bright spot in the Raiders' top three picks has been third round pick, Sio Moore, but even he has not played well enough to say he is preferable to Keenan Allen. And who's to say Moore or another equally good linebacker or defensive end would not have been available with the Raiders' next pick? You know, the one they wasted on quarterback Tyler Wilson who didn't make the team out of camp and is now with the Titans?

OR, if the Raiders liked Sio Moore that much, take him in the second round. They could have even traded down a second time, gotten more picks, and still drafted Moore. Perhaps one of THOSE picks could have been used to take Keenan Allen. Although it sounds like the Raiders were too concerned by his injuries.

"I did [like Keenan Allen]." Said Dennis Allen. "I thought he was a good player. Obviously he had the injury issue coming out but I knew he was a very talented player and he's shown that with the way he's playing."

"He's played exceptionally well. [The Chargers] get him the ball in a lot of different ways. He's been a red zone threat. He's also been a down the field threat for them. He's really improved as a receiver and it looks like the quarterback's comfortable throwing him the ball. He's a big target so that makes it tough. He's a big target and he's athletic, he's got a big catching radius and when you have those things it makes it comfortable for the quarterback."

Keenan Allen says the Raiders expressed no interest that he was a aware of and he didn't hear from them prior or during the draft.

Some controversy erupted when following the draft, Allen took a selfie of him in a Raiders hat. 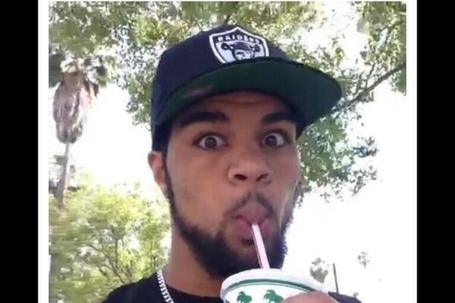 He claims now that he was not a Raiders fan growing up. He also said he treats playing the Raiders as he would any other team. This might not be a good thing because the way he is treating every team who didn't choose him. The Raiders just happen to be the worst offender.

"It's unfortunate, not only for me but for the other teams that passed on me," said Keenan Allen. "I'm just trying to make them pay for it."

The first time the Raiders met the Chargers, Allen did just that. He had a breakout performance with six catches for 115 yards and a touchdown. Now with his sights set on the Rookie of the Year trophy, the Raiders will just have to watch him run all over them and wonder what might have been.