The Oakland Raiders are making lots of changes in the new regime, is getting rid of Mount Davis next?

Share All sharing options for: Oakland Raiders to block off Mount Davis

While no news has broken on this, it appears as though the Raiders may be getting ready to get rid of Mount Davis as a seating option for the 2013 season.

For those who are not familiar, Mount Davis is a fourth deck of seating along the east side line at the coliseum. It was added to the coliseum when the Raiders moved back to Oakland in the early nineties. Long considered a monstrosity, the Oakland A's seldomly allowed fans to sit in Mount Davis, and many decried how the massive addition blocked what was once a beautiful view of the Oakland Hills.

You can see the empty space where seating options once were by looking at the stadium map currently on the Oakland Raiders website. 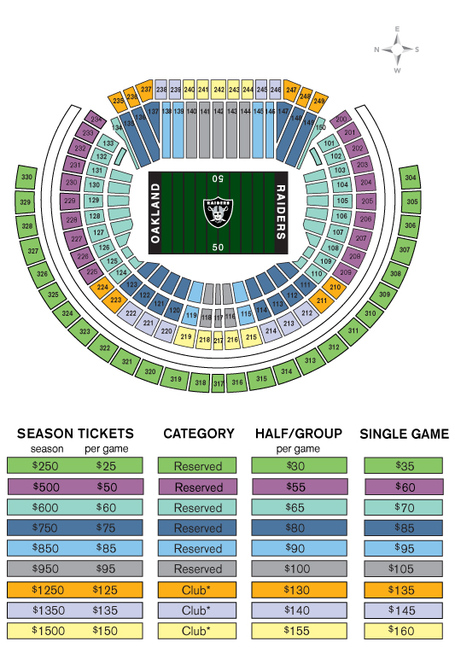 If you look at the upper most part, you will notice that Mount Davis does not appear on the map, and neither do the far end sections of the third deck.

In addition, on an Oakland Raiders forum, a commentor claims to have tweeted the Raiders to ask about Mount Davis and received a private message back that the Raiders would be making an announcement about seating and ticket prices later today (scroll down to comment number #22).

Now, according to S&BP's Levi Damien, Raiders Chief Executive, Amy Trask, has scheduled a media conference today at 2pm to explain the new ticket plans. In addition to blocking off those upper deck seats, the Raiders are also lowering prices.

The closing of Mount Davis isn't in any way to further themselves from the history of former owner Al Davis but rather, it is likely an attempt to ensure sell outs and not blackouts as the team continues to rebuild. Hopefully we will find out later today what is going to happen to Mount Davis.