A career in football is not a long one in the grand scheme of things. The average NFL player career lasts around 5 years. Even those players with longevity are hitting retirement in their early-mid 30's. And then what?

The NFL has put a renewed emphasis and helping players answer that question. They have arranged opportunities in the offseason for players to explore different careers outside of football. One such career is in the film industry and several current and former NFL players are taking advantage of the opportunity to get an up close and personal look at all the ins and outs of.

This is the second year of the program. First the players take workshops to give them a basic understanding of every aspect of the film business. They are split into two groups and each is given their jobs. If they want to act in the film, they must audition.

Once they have their films put together the players along with industry professionals utilize some prime locations on the Universal Studios backlot in which to shoot their respective short film.

One crew took to "Spartacus Square" which, as the name would suggest, was where the classic film "Spartacus" was shot among a few other films over the years since then. This film was titled "Et Tu Brute" which is a comedic take on the story of Roman emperor, Julius Caesar.

"The atmosphere is one that encourages you to be engaged, so you absorb a lot," said Barden. "Granted we're probably being taught the bullet point, the main things, and the basics... I didn't know there was so much to it, that there was so many jobs but they did a great job of breaking it down and creating a practical approach.

"What goes into being a professional athlete is extremely consuming of your time, your energy, your family's time... You don't have too much opportunity to develop other things or sharpen interests... The fact that the NFL provides this shows that they recognize the commitment their sports takes and they're giving opportunities to explore other things and create a foundation of interest as they might want to explore." 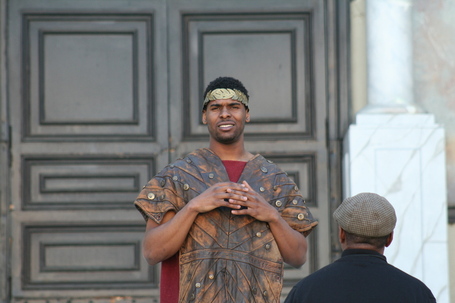 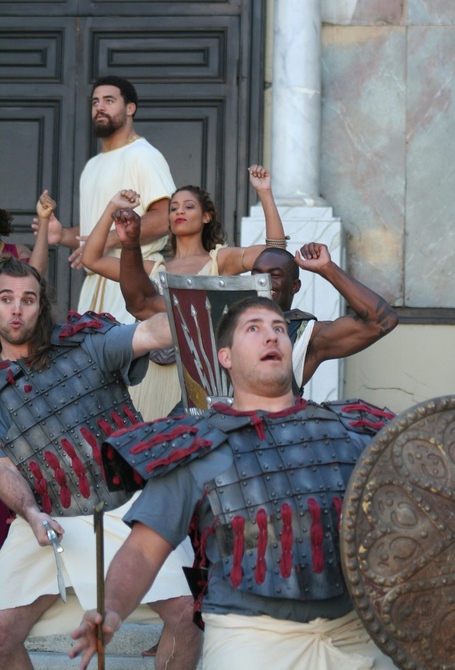 "I love the film business," said Derek Hagan. "I'm not a big actor but I prefer to be a cameraman or even an editor. Those two things I'm really interested in, that's what I'm here for, and that's what I applied for. I was fortunate to get accepted into this program and it's been a blast."

Justin Fargas is a good example of someone who isn't just interested in film, he's been pursuing it since he left the NFL after the 2009 season. His father, Antonio Fargas, has acted in over a hundred films and television shows, most notable in the starring role of Huggy Bear in the 1970's cop show "Starsky & Hutch".

"I've been working on screenwriting for a while now, developing stories," said Fargas. "Just wanted to get some professional training and experience working with some of the best in the business, so it's been great. Having a chance to work with (Director) Robert Townsend and a lot of talented guys that are also taking the program."

On another part of the lot, the other film was being shot. They had the famous "War of the Worlds" airplane crash site set at their disposal. This film starred current Buccaneers defensive lineman Gerald McCoy (seen above) who, as it turns out, is a pretty good actor.

"I had never acted before," said McCoy. "I did the audition last night so we had competed against three other guys and I won... I watch the special features, behind the scenes DVD stuff. I just kind of like steal stuff from them here and there and I'm like ‘If I ever get to do it I'm gonna do it like this' that's all it is... I wanna act after football but I had never done it before this."

This film is titled "H2O" and it has a completely different feel to it than the other film. Also starring in the film is current NFL player, Zoltan Mesko (Patriots) along with former players Drew Carter and Ben Leber. Behind the camera were current NFL players Darrius Heyward-Bey (Free Agent) and Justin Tryon (Giants) along with former NFL players LJ Shelton, Shaun Alexander, Phillip Buchanon, Ryan McNeil, and Marcus Price. 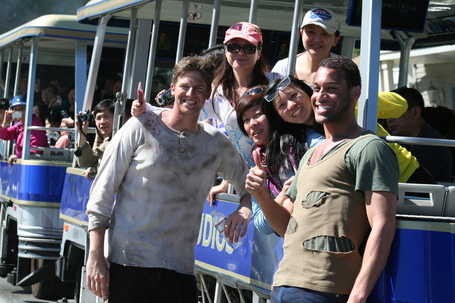 Darrius Heyward-Bey was soaking in the experience of working behind the scenes of a film set.

"Never done anything like this. Being here at the bootcamp is making me realize that some directing may be in my future," said Heyward-Bey. "Yesterday in pre-production I was a producer so I was helping figure out who was going to be the lead role, who was going to be the fill-ins and stuff like that and figure out how many cameras we need. And today I'm doing assistant directing and I have a quick probably 15-second directing of a moment that I really wanted to have in the film and they allowed me to do it, so we're gonna do it.

"This is what I came here for, this is what I been into since I was little so I'm excited... This bootcamp is a big opportunity for all of us to think about life after football because when guys retire about 30, you still got the rest of your life to live."

The message from the players was pretty...well, universal. They all thought the program was extremely beneficial. NFL players retire very young. After spending your entire early life working toward the dream of the NFL, having the rest of your life ahead of you after that dream has come and gone can be a daunting task.

They spent all that time putting every bit of their energy into one thing. Then when that one thing is gone, they don't have the skills or training to do anything else and don't even know where to start. . It all too often leads to depression as well as financial ruin for many former NFL players.

The efforts the NFL is putting forth to help these players find an avenue to a new career outside of football is a vital and, based on the sentiments shared by those who participated, will ultimately prove rewarding for the league and its former players.