Reggie Smith today tweeted out a picture of himself signing a contract with the Raiders.

There are a lot of ways a story can break about a player signing with a team. One such method is for the player to simply tweet out a picture of him signing the contract. That is exactly what Reggie Smith did today.

I'm going going back back to Cali Cali!!!!! instagram.com/p/X8Lt0JrHOY/ 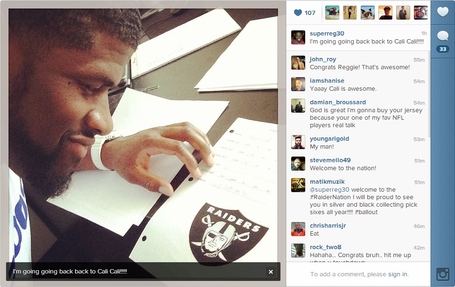 Earlier today, running back Rashad Jennings also tweeted he was coming to Oakland. It appears players these days are pretty excited to be headed to Oakland as the team is looking like the land of opportunity for wayward free agents looking for their shot.

Smith is a former third round pick by the 49ers out of Oklahoma. He spent the first four seasons of his career with the 49ers and spent last season in camp with the Panthers -- hence his "Going going back back to Cali Cali" line (a lyric from a Notorious BIG song).

He is a strong safety by trade and is added to a unit that had yet to replace the departed Mike Mitchell as the primary backup behind starter Tyvon Branch.