The rally at Raiders facility today was for Charles Woodson's visit but it accomplished a whole lot more.

The some 200 plus fans who gathered outside the gates to the Raiders facility today had the primary purpose of welcoming Charles Woodson as he arrived to interview with the team. But that turned out to be just a small part of the overall affect it had today.

There was actual practice happening today in the midst of this rally to bring Woodson back to the team. The fans were lined along the drive hours before Woodson arrived and eventually, the Raiders players had to come out.

First it was the special teamers who exited the facility. Jon Condo and Chris Kluwe drove out followed by Sebastian Janikowski, Marquette King, and Eddy Carmona. The fans cheered wildly to see their favorite players and it was King who received the loudest applause of all. He was visibly flattered by the response and tweeted about it later.

I was happy to see y'all like a lil kid. "@vminchillo18: @marquetteking couldn't stop cheesing today when you saw us"

The rest of the players have been trickling out as they leave the facility. Some stop and others don't. Marcel Reece stopped and actually got out of his car. He was mobbed and was hugging fans as they chanted "Reece, Reece, Reece". He later tweeted this out in response to my initial tweet.

It's real!!! "@levidamien: @celreece45 just stopped his car, got out, and is mobbed, hugging fans."

New Raider Jason Hunter, signed as a free agent from Denver, saw this and did the same. He got out of his car, put his arms up and jumped up and down with the fans.

Hunter and newly acquired running back, Rashad Jennings, were both loving their new fanbase. Jennings put his fist out his window as he drove past and fans gave him knuckles down the line. He then tweeted:

Thanks for the love today #raidernation

Once Woodson arrived, the fans went really crazy. But even after he went inside, many of the fans stayed as more Raiders players exited the facility including Lamarr Houston who also got out of his vehicle to embrace the fans. He tweeted out this great shot of him and the fans together, saying "Best fans period" 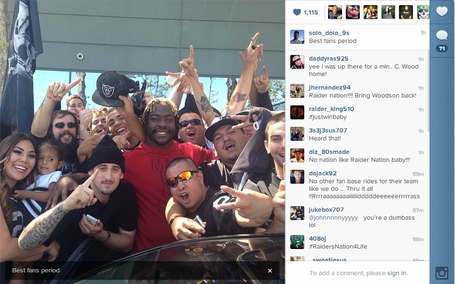 The fans continued to wait as they had yet to see Charles Woodson reappear. There was also still much of the team in the facility; namely the quarterbacks and rookies.

Eventually, Terrelle Pryor came out with bottles of water for everyone, which they very much appreciated. A bit later the other quarterbacks came through, with Matt Flynn stopping to sign autographs and get pictures with fans.

Then it was the rookies who loaded onto a shuttle bus to chants of "Sio, Sio, Sio" - for third round pick Sio Moore - and "DJ, DJ, DJ"-- for first round pick DJ Hayden. My guess is "Menelik" is hard to chant.

I spoke with Raiders Super Fan "Dr Death" who explained that greeting Charles Woodson was only part of their mission today. Their greater mission was to show general support for their favorite team and Woodson's arrival was simply the impetus for the event to happen.

The Raiders players have certainly gotten the message. And that kind of support goes a long way. Especially in May.