This graphic will give Raiders fans some mixed feelings I'm guessing. Some frothy mixture of face palm, hilarity, frustration, and relief. 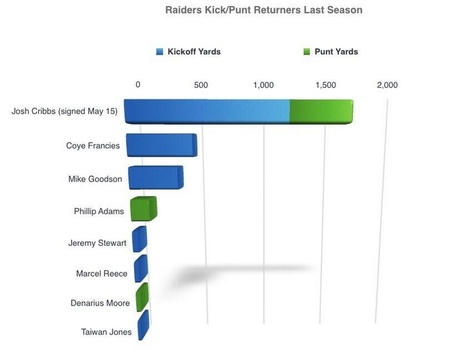 It is hard to fathom just how bad the Raiders return game was last year or how it could possibly have been allowed to be that bad. At the same time, it makes it easier to stomach knowing the team now that Cribbs is a Raider.

If Cribbs were not here, the Raiders would be relying on Jacoby Ford to work his magic in the return game. He is certainly capable of being a superstar return man. He has done it in the past -- most notably 2010 when he had three return touchdowns. The problem for Jacoby has been staying healthy.

It was Ford's health that had him out all last season and put the Raiders on the path to some of the worst return numbers one has ever had their eyelids forced open to watch. An example I like to use is when Coye Francies had his season long return... of 29 yards... one yard shy of his career high. You can laugh now.