Share All sharing options for: Raiders players kid around at Play 60 camp

This past weekend, the Raiders held their NFL Play 60 character camp at their headquarters in Alameda. Some 300 kids from the Oakland area attended the camp whose mission is to teach youth character and athletics in life through football skills.

The program is a huge hit with the kids as they get a rare chance to interact with real NFL players. As much as the kids gain from the experience, the players also have a great time. As you can see offensive linemen Tony Bergstrom (above) and Jason Foster (below) run drills with some camp participants. 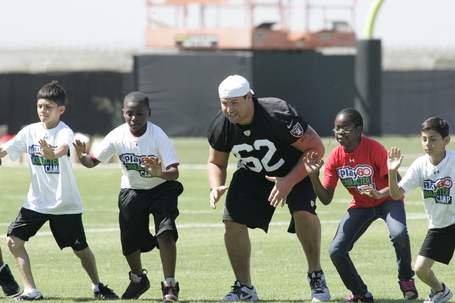 Many of these players, are proof positive that camps like this are invaluable to their development. Raiders new quarterback, Matt Flynn remembers when they attended camps when he was a youngster.

"I went to a lot of football camps as a kid and tried to take in as much as I could and every time I was able to see NFL players it was always exciting," said Flynn. "We all remember being kids so we try to give back as much as we can."

"It is important to give back to our community and spend time with the kids. I am more than happy to be out here today along with so many of my teammates."

Mandatory minicamp will take place on that same field Tuesday. For now, though, getting serious about NFL football took the weekend off in favor of some serious kidding around.