Still think Raiders are the criminals of the NFL? Latest results show not even close

Those who want to believe the Raiders are the criminals will choose to ignore this. I suggest Raiders fans not let them ignore it.

Share All sharing options for: Still think Raiders are the criminals of the NFL? Latest results show not even close

If you ever go and search Twitter for anyone talking about the Raiders following a player being arrested, you will see the level of ignorance that still exists among NFL fans. Patriots tight end Aaron Hernandez was the most recent example. As soon as he was charged with murder, it was a seemingly endless series of "Now he's going to sign with the Raiders" comments.

It's hard to say whether these fans really believe the Raiders are still a franchise who takes on undesirables and whose players are somehow more prone to being arrested or if they are just pretending that is the case to keep up the façade.

Raiders fans watch as players on teams around the NFL get arrested at alarming rates and then watch as everyone still acts as if it was a random occurrence. But if you look at the graphic, you see not only are the Raiders NOT among the teams with the most arrested players, but they aren't even close. 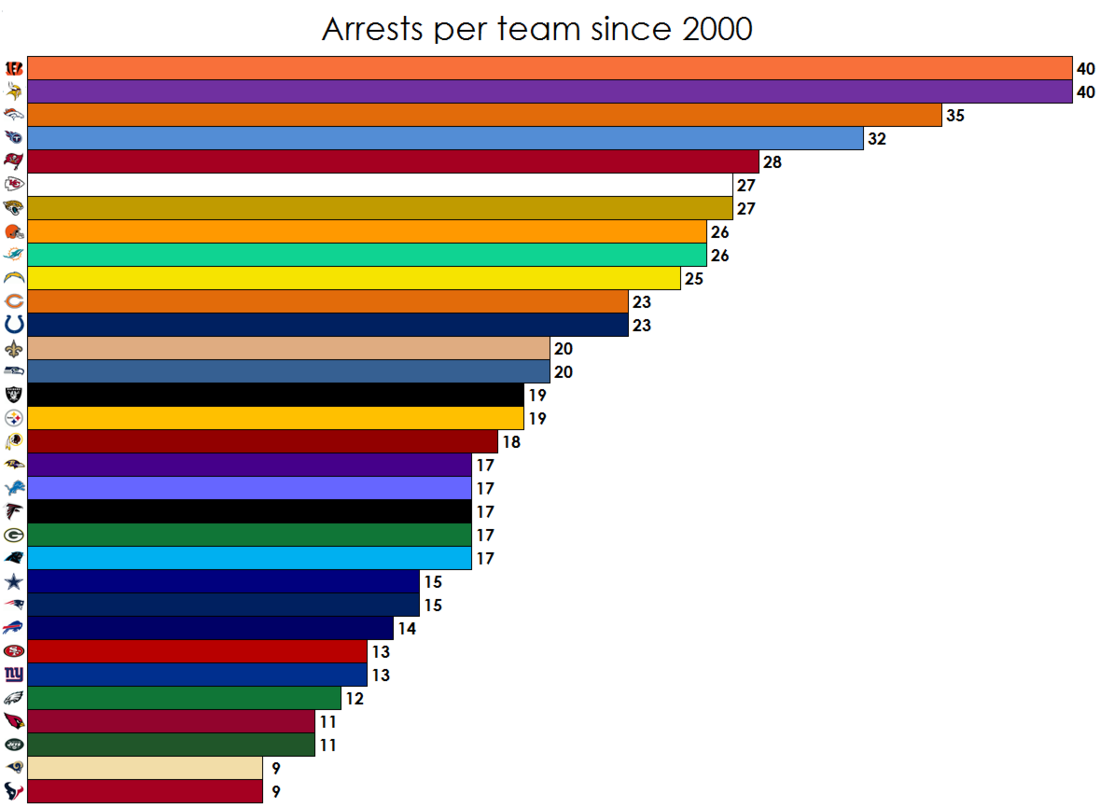 The Raiders have had 19 arrests over the past 13 years. That has them coming in right in the middle of the pack, tied with the Steelers for 15th in the NFL. And not only have the Raiders not been signing players who've been arrested, but they have been cutting ties with them. Rolando McClain and Darrius Heyward-Bey were the most recent and they were all let go this off-season. Desmond Bryant was arrested after he has been signed by the Browns as a free agent.

But what of the rest of the AFC West? The picture isn't pretty. All three of the Raiders' AFC West rival teams have significantly more arrests than the Raiders.

The Broncos come in at number three with 35 arrests. The Chiefs are at number 6 with 27 arrests. And the Chargers land at 11 with 25 arrests.

The AFC West has the most arrests of any division in football but it would probably surprise a lot of people to know the Raiders are not the reason why. They have been the best behaved of the bunch.

As Maria from ‘Westside Story' says, "Smoke your pipe and put that in."