Several items listed as being Ohio State 2008 Big Ten Championship rings have appeared on EBay -- a Terrelle Pryor ring among them.

A few interesting pieces of sports memorabilia from an equally interesting source appeared on EBay this week. The items include several supposed Big Ten Championship rings from Ohio State Buckeye players including one which appears to be Terrelle Pryor's ring.

The EBay seller's name is "finelineinkusa2010" - fine-line-ink as in tattoos - and the item was literally listed as "2008 Ohio state big ten championship ring from tattoo scandal (pryor)".

The picture shows the top of the ring with the Ohio "O" set on four engraved trophies, and the sides of the ring which has "Pryor" engraved on it and notes the OSU 42-7 win over Michigan on November 22, 2008. 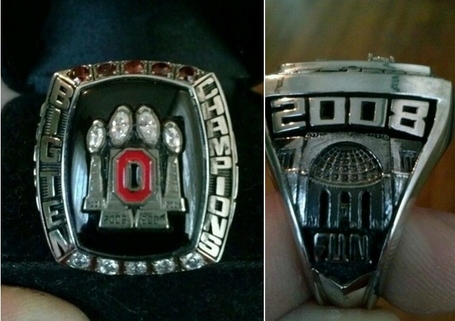 For those unfamiliar, the "tattoo scandal" of which they are referring was the one in which Ohio State players were trading memorabilia in exchange for cash as well as tattoos at a Columbus tattoo parlor while attending Ohio State. The scandal cost the football team several seasons of bowl eligibility (including last season in which the Buckeye's finished 12-0), cost head coach Jim Tressel his job, and had several Ohio State players suspended, including Pryor.

When Tressel was out as head coach, Pryor jumped to the NFL by entering the supplemental draft, hoping to avoid the impending suspension only to receive a 5-game suspension from the NFL after the Raiders selected him with their pick in the third round.

Pryor being the quarterback of the team as well as his exit from Ohio State and entrance into NFL has made him the face of the scandal, but he is just one of many Buckeye players who were involved in it.

There are several other 2008 Big Ten Championship rings being sold with the same item wording, just different players, with pics of the rings with those players' names engraved on the side. Those players to whom the seller is claiming these rings had belonged include now Pittsburgh Steelers' offensive tackle Mike Adams, and Houston Texans wide receiver Devier Posey.

Thus far, Terrelle Pryor's ring is by far the most coveted. It sold for $18,100 late Saturday night with 63 bids. Adams and Posey's rings sold for $3850 each. Two other such rings were listed - Soloman Thomas and Jamil Martin.

The authenticity of these rings has not been verified but the interested buyers are connecting the dots and so far, only one the Jamil Martin ring failing to receive the $1,000 starting bid and the final item (Soloman Thomas ring) at over $2000 with 3 hours remaining.