My notes from day 3 of Raiders 2013 training camp practice in Napa.

It was a cool, overcast 57 degrees when the players took the field for this morning's training camp practice. The cooler temperature was a welcome sight this time of year as Napa can get pretty sweltering. The sun came out a bit later but it was still comfortable.

There was also a pretty large fan presence just like yesterday. I would say they got a pretty good show.

It was the first day of camp in pads for these players which means it was also the closest thing any of them have had to real contact since the final game of the 2012 season.

Also on the sideline not practicing was Sio Moore who was injured on day two presumably on a play in which he leapt in the air to defend a pass and took a header into the chain separating the field from the fans in the bleachers. He was on the field watching as his teammates practiced in pads - something he undoubtedly had great difficulty with considering how much of a high motor guy he is.

Also not practicing was Kaluka Maiava who left practice yesterday on crutches in a walking boot. Sam McGuffie was out as well presumably after taking a hit on the first day from defensive back Cory Nelms. He was unknown before which could suggest he was having concussion symptoms and was held out because of it.

Joining the hurt is (drum roll, please) Jacoby Ford. Ford was dinged up in minicamp as well. After missing all of last season and part of the 2011 season, Raiders fans have gotten to the point of wanting to wrap him in industrial bubble wrap. We'll see if his exit was temporary or if he will return tomorrow.

Billy Boyko was also out. The combination of Burris, Maiava, Moore, and Boyko not in the lineup makes for an extremely thin linebacking corps. It consisted of primarily Nick Roach, Kevin Burnett, Kaelin Burnett, Keenan Clayton, and Ryan Harper. A couple times, the Burnett brothers took the field together with their 94 and 95 jerseys.

As I wrote in greater detail, Rod Streater looked outstanding. He has looked very good all three days of camp and took it up a notch today. Seems odd that he can get even better once pads are on, but he was. His play today was enough to make me (and his quarterbacks and coaches) more confident that he can step up and be a number one receiver.

I mentioned it yesterday as well, but it bears mentioning again; Terrelle Pryor's passes continue to look very good. His deep ball especially has improved greatly from last season. Where his passes would typically wobble and float, are now mostly tight spirals and very often right on target. It was one of the biggest criticisms of him over his first two seasons in Oakland so his improvement is impressive.

While the athletic Pryor is showing some skills throwing the ball, Tyler Wilson was showing he has a bit of athleticism of his own. He is deceptively fast and elusive and does well squaring his shoulders and delivering a ball on the run.

Flynn's passes looked good overall, but the defense was making a few good plays on them. Mike Jenkins knocked down a pass intended for Denarius Moore, Charles Woodson read a pass perfectly which was intended for Streater and he laid out to knock it down, and later Kevin Burnett dove to bat one of his passes down as well.

The lone interception of the day came from Taiwan Jones on a pass from Matt McGloin. It was a good play by Jones on a ball with not much on it.

The first fight of camp took all of two plays into padded team sessions to occur. Jason Hunter took Darren McFadden to the ground and Khalif Barnes got into it with him which caused a big ruckus that dissipated pretty quickly. It will get more heated than that as we get deeper into camp.

The drops continued today in camp with several players having at least two each and a few others having at least one. In total it was more than ten drops with Tray Session, Isaiah Williams, Marcel Reece, and Jacoby Ford all having two each in team sessions.

D.J. Hayden was ok with the red jersey on the first day but as of today, when pads came on, he wasn't liking it as much. He tried to sneak into tackling drills (kinda hard in a BRIGHT RED jersey) but was pulled out by Allen. He did get a chance to partake in team sessions but was still limited.

For a bit of adorable news, Kevin Burnett's kids are at training camp. In the picture I snapped below, his youngest, Kniight Burnett, stopped to speak with Raiders linemen Alex Barron, Andre Gurode, and Andre Carter after practice. Gurode, being the fun-loving character he is, talked up the little guy. He told him jokingly "Don't be like us when you grow up. Football is a hard life." 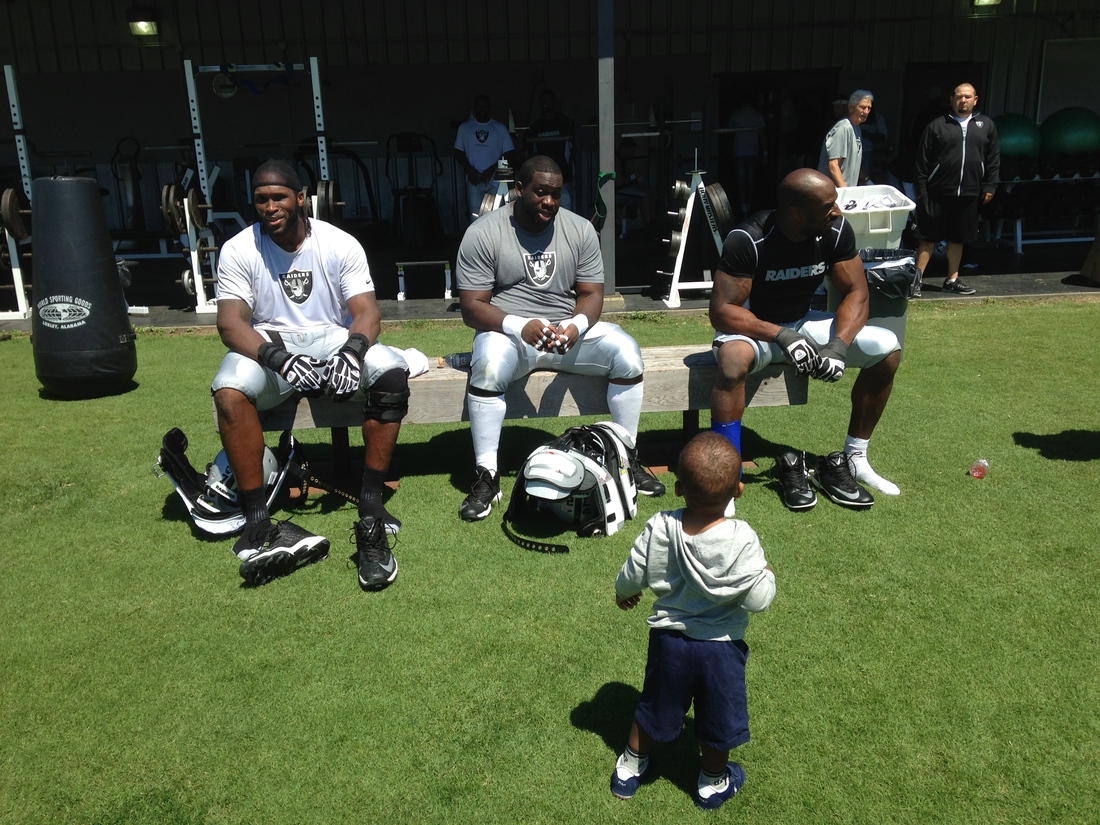 Kevin's family was at camp the first two days and his wife told me they will be there every day of camp. Kevin could be seen with his kids climbing all over his lap yesterday. They love their daddy. I think that's pretty great. She seems like a great lady and they have a nice tight-knit family.