Two Broncos DUI arrests in less than a month

When it comes to arrests, the Broncos are aiming high.

Share All sharing options for: Two Broncos DUI arrests in less than a month

It seems the Broncos personnel can't seem to keep from getting behind the wheel of a vehicle after having too much to drink these days. In a two day span, we have learned of two different members of the team's front office have been charged with Driving Under the Influence of alcohol.

Monday it was executive Matt Russell who was arrested and charged with DUI, now today it comes out that Director of Player Personnel, Tom Heckert is charged with DUI June 11.

Said the Broncos organization in a statement: "Tom's actions are obviously part of a disturbing pattern of irresponsible behavior that we are aggressively addressing within our organization."

Heckert was arrested just under a month ago under suspicion of DUI but the Broncos managed to keep it under wraps. Tuesday Heckert's arrest became public and now he is saying he is sorry.

"I am extremely disappointed that in my short time with the Broncos I have made such a serious mistake. My actions last month have brought embarrassment to the organization, and I fully understand the consequences that are involved. I am truly sorry and take complete responsibility for this situation.

"Although I have let many people down, I will learn from this and work toward regaining the trust that I have lost."

Here is the original report via CBS Denver:

Matt Russell, the Denver Broncos Director of Player Personnel, was arrested over the weekend after police say he hit a car in the mountain town of Frisco, then crashed into a police car a few minutes later in Breckenridge.

Sources say after the incident in Frisco Saturday evening, area police departments were on alert looking for Russell's vehicle. A few minutes later a Breckenridge police officer was waiting along Highway 9 on the outskirts of town at about 7:30 p.m. when Russell's vehicle approached and rear-ended the police cruiser.

The Breckenridge officer was hospitalized with what are described as minor injuries. Police arrested Russell at the scene.

Russell is facing charges of driving under the influence, careless driving resulting in injury, having an open container of alcohol in his car, and failure to display proof of insurance.

Just a week ago, I posted the results of a study that was done recently showing the Broncos were the third most arrested team in the NFL since 2000. I don't know if front office personnel play into that figure but if they do, that makes 37 arrests for the Broncos in 13 years -- nearly TWICE as many as the Raiders (19) over that same time span. 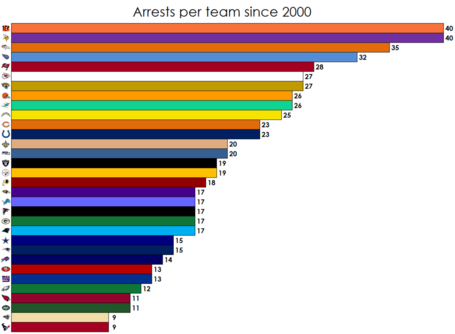 While 37 arrests still isn't enough to surpass the top two most arrested teams -- the Bengals and Vikings (40 each) -- at this rate, it might not be long.