My notes and observations from day 6 of Raiders 2013 training camp.

After a day off from camp practice, the Raiders were back at it today. They had pads on the three previous days and were down to shells today with no contact.

The offense was still sporting the coveted silver jerseys. I guess that means they are still winning the camp battle.

The newest Raider, defensive tackle Myles Wade, was on the field wearing the number 78.

The only player to return to practice today was defensive tackle Vance Walker. His presence was important because even with him back, the defensive tackle rotation was very thin. Those still out are Pat Sims, Stacy McGee, Brandon Bair, and Johnny Jones.

Brandian Ross was not practicing today and was seen working out on the sideline during warm-ups. Lamarr Houston only lasted a few minutes before he was sidelined and unable to finish practice.

Dennis Allen said after practice that he expects Lucas Nix, Jacoby Ford, and Stacy McGee to be back soon. For others the outlook is not so good. Kaluka Maiava and Alex Parsons are both in walking boots. Others still out are Billy Boyko, Conner Vernon, Latavius Murray, and of course Miles Burris and Menelik Watson.

Denarius Moore had the catch of the day on a long bomb from Flynn which quickly became double coverage. He had Tracy Porter in his hip pocket up the left sideline and Charles Woodson flew over from centerfield and was on top of him as the ball arrived. Denarius still made the tough, contested catch. That's the kind of concentration we had come to expect from him over his first couple seasons with the team. He had another nice back-shoulder catch with Chimdi Chekwa in tight coverage.

Mychal Rivera looked very good today. He pulled in several nice catches. One in particular in which he beat safety Usama Young deep on a post pattern from Tyler Wilson. Another pass he laid out for a nifty catch along the sideline from Flynn. If it weren't for the aforementioned catch by Denarius, that catch would have been the best of the day.

Tyvon Branch had a nagging injury today. He hopped up with what looked to be a hurt foot at one point. I thought, this being training camp and no contact, he would head to the sideline, at least for a few plays if not the rest of practice. But he didn't even come off the field. A bit later, he went down in a heap and didn't get right up. Before I could even tweet it out, he was limping off the field under his own power. And no sooner could I mention it but he was back on the field for the next play. One can only hope Jacoby Ford was watching this play out and felt a bit less like a man.

Taiwan Jones had a nice day today. After being burnt several times on Monday by undrafted rookie Greg Jenkins, Jones got the better of the match-up today. He was stride for stride with Jenkins up the left sideline to break up a long pass from McGloin. The pass was right there but so was Jones. He later had tight coverage on Brice Butler on a crossing route. Pryor didn't quite lead Butler as he should have and Taiwan was right there to bat it down.

After being impressed by Terrelle Pryor's newfound mechanically sound throws and accuracy, he came crashing back to earth today. His passes were often late, short, behind, and fluttering which was very much his issues prior to the past few days. It is just one day and who knows why it is, but it does tell you his training hasn't quite stuck to the level of him not having to focus on it. It's clearly a long work in progress.

Lincoln Kennedy made an appearance at practice today. After practice was over, the team's offensive linemen were eagerly taking instruction from Kennedy who was watching intently throughout practice and had some specific pointers to give many of them on how they can tighten up their games. I spoke to him afterward and he said the things he told them were not things Sparano had mentioned. I guess sometimes it just takes another set of eyes. I told him he should see about getting on staff and he agreed. He also was holding a Monster Cuban cigar. Literally, that's what it was called. A Monster. It's great to see Lincoln around. 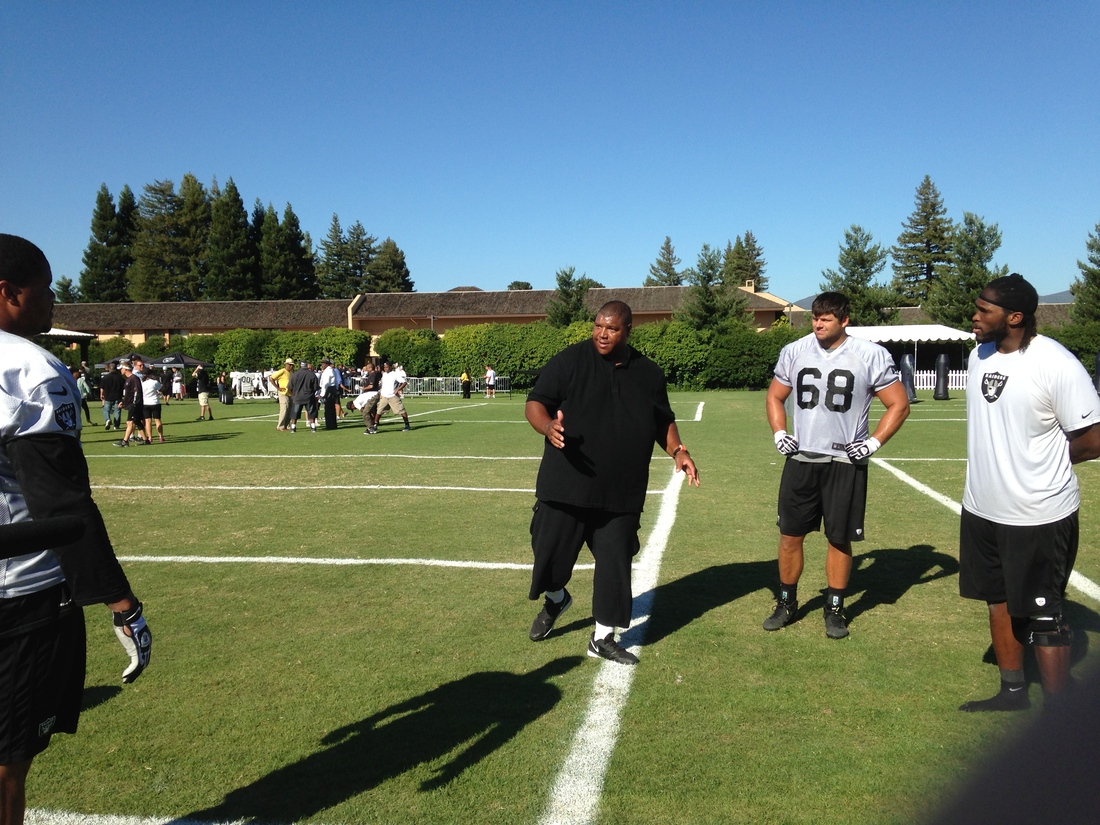 There wasn't a whole lot going on in practice today. As the first day out of pads, things cooled down a lot. Hopefully the pads come back on soon so we see some more scuffles. Yes, I am like a Nascar fan who watches for the crashes. Except I'd rather be shot in the face than watch cars drive in an oval for hours on end.

Back in the morning for day seven. As usual bang it on the button below for my Twitter updates during practice.