Notes and observations from day 8 of Raiders 2013 training camp.

It was all confusing coming into practice today seeing the offense in black and the defense in the ‘coveted' silver jerseys. They have been winning the battles in practice of late and according to Dennis Allen, earned the right to don the silver jerseys. He sees it as a way to engender competition. I see it as a way to confuse my eyes when I'm trying to follow what's going on. But hey, that's what numbers are for, right?

Passing drills were rough today. The receivers were dropping passes left and right. It would be easier to say those who I actually didn't see drop at least one pass right on their hands. Isaiah Williams, Travionte Session, Brice Butler, and Jacoby Ford.

Oh yeah, Jacoby Ford was back at practice for the first time in a week. He went out midway through the third day and despite Dennis Allen saying several times that he would be back soon, he finally returned today. He said it was tightness in a tendon in the back of his knee. He was at 90% in play and had less reps than normal.

Jared Veldheer was not practicing as well. He had a soreness in his tricep and the team did an MRI and it came up negative but decided to give him the day off anyway as a precautionary measure.

Denarius Moore had the catch of the day when Matt Flynn put a ball on him in the back corner of the endzone over Mike Jenkins. Jenkins then pushed Denarius per NFL rules out the back of the endzone and he slammed hard into a girl on the Raiders staff who was standing along the fencing. She was hurt but I found out later she was ok. Nice catch but not so nice for her.

The best pass came from Terrelle Pryor who threw a perfect 50-yard bomb to Brice Butler on a post pattern. Phillip Adams was in coverage but as they say, there's no defense for a perfect pass. Pryor gave a big fist pump and the crowd erupted.

Matt Flynn also had a solid day overall to bounce back from yesterday where he was getting his passes defended. He fit the ball in some tight windows today including finishing practice with a dart to Denarius Moore down the middle in short yardage for a touchdown.

Tyler Wilson had a few rough throws and is doing nothing to thus far to earn his way back up to the third team. McGloin on the other hand is very much earning the right to remain in that spot.

Mastrud may not have a lot of cred in the receiving arena, but he is quite the blocker at tight end. He has all of one catch in his three-year NFL career but with his blocking prowess, it isn't hard to see why he continues to get looks from teams. On one blocking drill, he blocked Shelton Johnson hard and then before Johnson could get his footing, Mastrud knocked him back two more times, ending in knocking him over a blocking dummy.

On the flip side of that is Deonte Williams whose pass blocking is nearly non-existent. There is no way he can make an NFL squad with blocking like that. He was beaten by every defender I saw him face. First Sio Moore, then Eric Harper, then Nick Roach. He absolutely needs to work on that.

Alex Barron got first team reps in place of Veldheer at left tackle. He has been quite good in camp and Dennis Allen glows about how surprised they are in his play this camp.

Jack Crawford was working inside at defensive tackle today due to the injuries at the position. Dennis Allen said yesterday they are looking to bring someone in at defensive tackle though they have not done it yet. And with Vance Walker sidelined again, the need arose even more. Hard to say why they haven't signed anyone yet.

After practice, the team set up a bunch of their blocking dummies and pads and kids were playing on them like it was a jungle gym of sorts. I snapped a picture of this little guy playing with some red tackle pads. It took everything he had to hold them up just long enough for the picture. 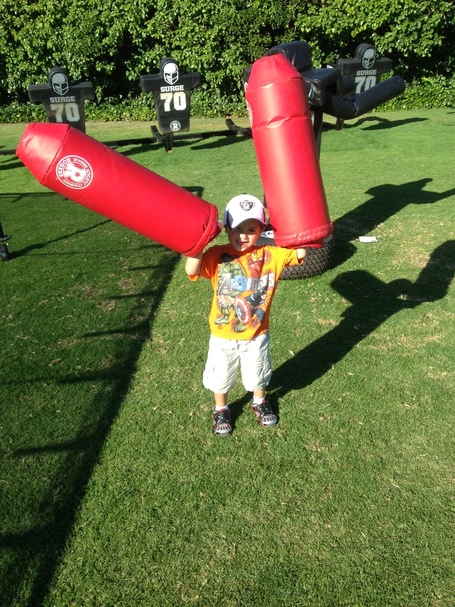 Back at it in the morning at 9:20am for day 9. As always, follow me on Twitter to keep up with all the action by clicking the link below.