Notes and observations from day 9 of the Raiders 2013 training camp.

The dog days of camp are here. Camp wears on as injuries pile up. The team was not in pads today as a product of the mounting injuries along the defensive line. There are now 7 defensive linemen not practicing, most of them defensive tackles (see sit outs below for entire list).

After just one day with the silver jerseys, the defense was back in black. Word is the silver jersey rights were surrendered on the final play of yesterday's practice. That play Flynn thread the needle underneath to Denarius Moore for a touchdown. Denarius spiked the ball in celebration of winning the silver jersey back. Wearing silver isn't just a symbol of competition, it's much cooler running around in the Napa sun than being in black. Or in the case of many of the Raiders defensive players, standing in the sun. Although it was cloudy through the first part of practice and remained pretty cool even when the skies cleared.

As I mentioned, there are seven defensive linemen not practicing. Three are starters: Pat Sims, Vance Walker, and Lamarr Houston. The others are Johnny Jones, Stacy McGee, Brandon Bair, and Myles Wade. That leaves the team with just two healthy defensive tackles: Christo Bilukidi and Kurt Taufa'asau.

Returning to practice today was Brandian Ross. However, adding to the tally was starting corners Tracy Porter and Mike Jenkins as well as linebacker Sio Moore.

Mike Brisiel and Josh Cribbs were both held out of practice but it was not explained as injury related.

That's a total of 20 players held out of practice today in case anyone was wondering.

Jared Veldheer practiced today as promised but he had a wrap and a brace on his left arm following tricep soreness that had him out yesterday.

There was a new offensive line alignment today. With Allen giving Brisiel the day off, Khalif Barnes moved inside to right guard, Alex Barron moved to right tackle, and Willie Smith got second team reps at left tackle. Dennis Allen says it was his plan all along to try out these guys in new positions just to see how it works out. Willie Smith had been at right tackle pretty exclusively up to this point backing up Khalif Barnes and sometimes Barron as well. Barron has been bouncing back and forth between left and right tackle but this is his first shot at right tackle with the first team.

Matt Flynn had the pass of the day. Rod Streater broke free along the endline in the back of the endzone and Flynn led him perfectly for a touchdown.

With Tracy Porter and Mike Jenkins sitting out, Taiwan Jones got quite the promotion. He was working with the second team defense. He has been earning that promotion of late. He had a great diving pass breakup in practice today on a pass from Pryor which was intended for Jeron Mastrud. Taiwan still gets caught making little miscues here and there but he is very much grabbing ahold of his new cornerback role. At this rate, it may be Porter who has to shell out some compensation if he wants the number 22 from Taiwan.

Pryor got his revenge on Taiwan a few plays later when he rolled right and hit Jacoby Ford in the corner of the endzone for a touchdown.

Chance Casey is another defensive back making a Case(y) for a Chance at a promotion (#Boom). The undrafted free agent has been dominating the third team receivers and it could mean some more reps with at least the second team to see how he holds up.

The Raiders locked up another of their special teams aces today. Yesterday it was Sebastian Janikowski getting a 4-year extension and today the team made sure he had his long time long snapper locked in as well. They extended Jon Condo three years. Both players were entering the final year of their contract.

Following practice, the Raiders were working out a defensive lineman. His name is Ryan Baker and he has played four seasons in Miami with zero starts. He looks healthy and that is pretty much all that matters right now.

Also going through some defensive lineman drills was Jeanette Thompson. The former Raiderette and current host of Behind the Shield and Raiderette dance captain was receiving tips on swim moves from defensive end Andre Carter. 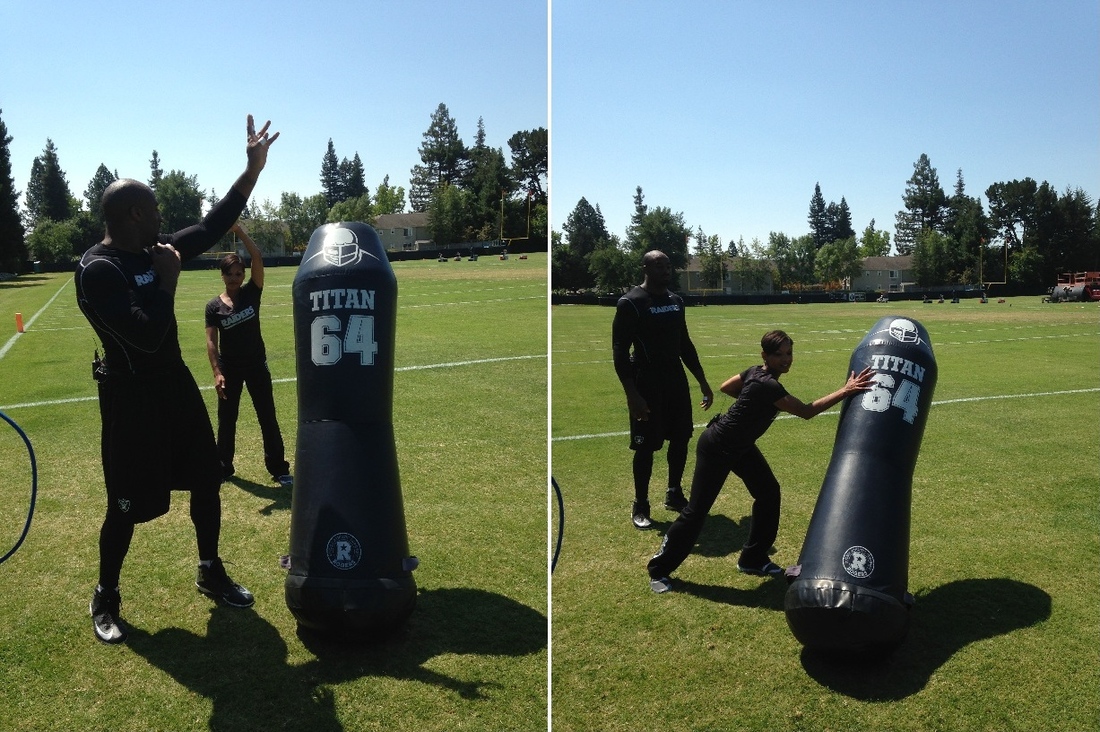 Raiders return to practice again tomorrow at 2:50pm. Hopefully in pads this time as the start the week prepping for their first preseason game on Friday. As always, bang the button below to follow the action on Twitter.