Notes and observations from day 10 of Raiders 2013 training camp.

It was to be the first day of camp this year in which there wasn't a crowd of season ticket holders filling the bleachers along the side of the field. There was, however, still a pretty decent crowd there. This crowd was made up mostly of three of the local high school football teams.

About three quarters of the bleachers looked like a high school football team picture with players in their jerseys from American Canyon, Napa, and Vintage on hand to watch the Raiders practice. The remainder of the stands were filled with suite holders and sponsors. 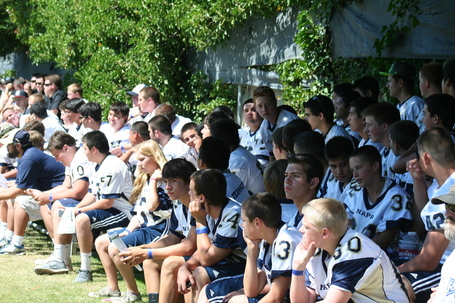 Also on hand to talk to the young football players were former Raiders Tony Stewart and Sam Williams. At some point during practice Justin Fargas showed up as well although he didn't speak to the high schoolers.

New Raiders free agent signee, Ryan Baker, was on the field today hours after signing with the team. His was wearing number 60.

Back at practice today were Mike Brisiel and Josh Cribbs who both got the day off yesterday. Also returning from injury were linebacker Sio Moore, defensive tackle Stacy McGee and offensive guard Lucas Nix. With McGee back on the field along with the addition of Ryan Baker, the team had enough defensive tackles to actually fill out the first and second team. The first team was Christo Bilukidi and Stacy McGee and the second team was Baker and Kurt Taufa'asau.

The team was back in full pads again today and they were hitting each other plenty. This is one of two full practices remaining before the team heads into their first preseason game on Friday so it's time to start making it count.

For the first time since camp began, the list of injured players actually shrunk today. Moore, McGee, and Nix returned and there were no players who were unable to finish practice. And we can take Johnny Jones off the list because he was waived to make room for Ryan Baker.

D.J. Hayden had a hamstring flare up but after working with a trainer on the side for a couple minutes, he came back out and appeared fine. Dennis Allen mentioned it after practice but said it wasn't anything serious. Allen did say that Hayden will not play in the preseason opener because he has yet to be cleared by doctors for full contact.

He also added that Kaluka Maiava and Miles Burris are not playing in the preseason opener.

The catch of the day came from Jeremy Stewart. Flynn put the ball in the air and let Stewart go get it. Also making a play on the ball was Kevin Burnett who jumped but couldn't reach it while Stewart went up high to make a one-handed grab for a touchdown.

Most of the day, it was all about the defense. They were batting balls down at the line and making plays in the secondary.

The defensive player of the day was David Bass was steady getting in the backfield on Terrelle Pryor. He got between Pryor and his intended receiver in the left flat and got up to bat the ball down on one play. Later Pryor stayed in the pocket a little too long and Bass came around his blind side on what would have been a huge sack. Then Pryor launched a ball for the endzone only to have Usama Young track it down and fly in for the interception. That was also the defensive play of the day.

Flynn's day was not dissimilar. He saw a pass batted at the line by Jason Hunter and later overthrew Jeron Mastrud and was picked off by Phillip Adams. That play by Adams rivals the interception by Young on the Pryor pass. Both were well played balls by the defender and tough catches. Young simply had to come from farther away to get his.

The day ended with a laser pass from Matt McGloin that bounced right off Greg Jenkins' hands. That was typical of the kind of day the offense had. Either the quarterbacks were throwing bad passes or the receivers were not making the catches. It is fitting that it was a running back with the catch of the day as well.

Early in camp, the amount of reps each quarterback saw was closer to equal but as camp goes along, it has changed to more what we saw in OTA's and minicamp. In team sessions today, Matt Flynn saw two drives, Terrelle Pryor saw one drive, Matt McGloin saw one series, and Tyler Wilson saw one play. Those spots and reps are what each have earned this camp.

Chimdi Chekwa has been looking pretty good lately. With Porter and Jenkins out with injury, he's been getting some work with the first team and is holding his own pretty good. On one play he had tight coverage on Rod Streater to disrupt his route, then beat him to the Flynn pass to knock it down. After practice, Dennis Allen mentioned Checkwa has been one of the most improved players in camp.

The team has the day off tomorrow but I would expect when they return on Wednesday, the defense will be wearing the silver jerseys. Great for them, not so much for me who must untrain my eye to the idea that the defense is always in black.