Here is everything you need to know to be ready for the Cowboys to visit Oakland in their preseason week one match-up.

The Raiders kick off their 2013 preseason versus the Dallas Cowboys tonight. Here is what to know and what to expect.

What: Oakland Raiders vs Dallas Cowboys

TV: Blacked out live locally with tape delay on KICU. Live on NFL Network outside of Bay Area.

If you are attending the game, be aware of the new bag policy at the stadium. Most bags are now prohibited. That means purses, backpacks, binocular cases, camera cases, clear backpacks, tinted plastic bags, printed pattern plastic bags, fanny packs, seat cushion with pockets, oversized tote bag, diaper bag, and mesh bag. The only bags allowed are small clutch purses and clear bags like this one: 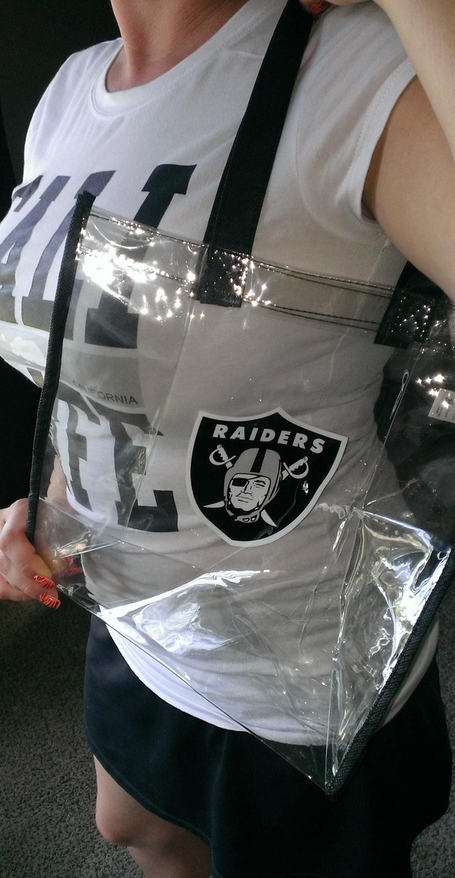 As I understand it, this particular bag will be on sale at the stadium for $3. You can also bring a ziplock bag up to one gallon if you don't have a clear bag such as this and don't wish to purchase one. A lot of people will likely not get this message and show up with their normal bags which could make for a long wait in line so enter the stadium early if you can.

The first preseason game is always an exciting time because after the long off-season, it's the first glimpse most fans have of their favorite team.

For most fans, it's all about the first few drives because that's when the starters are in. But for Raiders fans this season, it's about more than that.

This team has 60 new players and most of them are not guaranteed anything. They must fight for their position on the depth chart and perhaps their spot on the roster. That means, even the starters may not be the starters come the regular season and they could be replaced by a guy who is still on the field well into the second half. It makes the whole game worth watching.

There are a number of players who came into camp on the bubble. The Raiders will be putting greater emphasis on game performance so those players would greatly help their chances of making the team with a strong performance Friday. Here are a few players to watch for who played well early in camp and look to parlay that success in the game.

The starters are slated to play the first quarter although I would expect some more established starters and, of course Darren McFadden, to play a bit less time.

All four quarterbacks will play in this game but how their time on the field is split up remains to be seen. It will go Matt Flynn, Terrelle Pryor, Matt McGloin, Tyler Wilson.

Sebastian Janikowski and Chris Kluwe will be the kicker/punter tandem in the first half with Eddy Carmona and Marquette King taking over in the second half.

The Cowboys are playing their second preseason game after having played in the Hall of Fame game last Sunday. They didn't have a few of their star players in that game but all are expected to play in this game.

To read more about what to expect from the Cowboys, read my Q-n-A with Blogging the Boys.

The Raiders released an unofficial depth chart for the game. Click here to see that.

The Raiders have two players who were recently Dallas Cowboys - CB Mike Jenkins, and WR Andre Holmes. The last regular season game Alex Barron played was for the Cowboys back in 2010 before they gave up on him after one season in Dallas. There is also former Pro Bowl center, Andre Gurode who was with the Cowboys for nine seasons from 2002-10. Keep an eye out for those four to make an impact against their former team.

Alex Barron has been showing up big time at tackle for the Raiders. He will see extensive time in this game. His biggest problem was false starts so that will be something to keep an eye out for. He has also played both left and right tackle this training camp so keep an eye out for which side he lines up on.

Speaking of Taiwan Jones, Raiders fans will finally get to see how he's coming along in his switch from running back to corner. This isn't Jones' first time at the position. He wasn't just teammates with Sterling Moore at Deer Valley High School, he and Moore started on each side at cornerback. The two will take the field as corners once again. This time for opposing teams.

The most unsettled position for the Raiders is tight end. David Ausberry is the favorite to start but Richard Gordon is listed at the top of the team's unofficial depth chart. Even so, the two rookies, Mychal Rivera and Nick Kasa, have looked good in camp and could push for the job and even Jeron Mastrud could be in the mix. Brian Leonhardt is on the outside looking in.

Fans will no doubt go out of their minds to see Charles Woodson take the field wearing his old/new number 24 for the first time in eight years. He probably won't play much but he will start.

Alright, sports fans, I know you're ready for some Raiders football. It's just hours away now.