With four teams left in the running for the Lombardi Trophy, who will come out the victors in this, the penultimate weekend of football this season?

Greetings, Raider fans! It is I, RaiderDamus, the Vanilla Thrillah, the Cereal Killah, the Prophecy Distillah, and Cam Newton's mom's favorite player. I come to you today riding high, coming off a 4-0 prediction record in the Divisional Round. After going 1-3 in the Wild Card Round, I was perfect last week. If you disagreed with my picks, you better call somebody, and if you're not down with RaiderDamus, I have two words for ya.

This week we're down to two games, the AFC/NFC Championship Games, There are four teams left, and they have arguably been the four best overall teams in football this year. This proves that the BCS works the cream rises to the top in the NFL, both in coaching and in talent. You would be hard-pressed to find any teams in the league with more talent than the four we have remaining, and you won't find any player in the world better than Peyton Manning. We as Raider fans may get upset because the media slobbers all over Manning, but the dude is nails and deserves every bit of adulation and credit he gets.

On the other hand, Russell Wilson is a swell guy and all but is probably overrated in terms of how he is perceived in relation to his on-field production. The Seahawks rely on rushing and defense, not on Wilson, but if you just went by how the media talks about Russell Wilson you'd think he was vintage Fran Tarkenton. Wilson is a fine player but he's a poor man's Randall Cunningham and he's no threat to throw for 350 yards and four touchdowns, Not that he can't, and not that he never did in college, but it's that the team doesn't need him to. I postulate that the Seahawks drafted Tarvaris Jackson about seven years too late, as even he could win with this group.

And now, ladies and gentlemen and whatever else is out there reading this, here is the word of the Great Beyond.

"You're back? Are we almost done? Three more games. Fine. We'll start with the AFC Championship Game. This is a true battle of heavyweights, the two best teams in the AFC. It's enough to make CBS executives have unmentionable dreams and for the nation to be subjected to 45,000 Dish Network Hopper commercials. If they left those Bostonian lummoxes on the moon this time, we'd all be happier for it. The Patriots go to Mile High Stadium (I refuse to call it Invesco) to take on the juggernaut Broncos, led by the greatest quarterback of this or any generation, Peyton Manning. Manning may not have the rings that some other quarterbacks do, like Starr, Aikman, Montana or Bradshaw, but he is better than they ever were and never had the team around him to have a Super Bowl dynasty as they did. I'm not sure beating Rex Grossman in the Super Bowl should even qualify Manning for a trophy at all, but this year he will have more of a challenge for sure.

The Patriots were able to run the ball without much resistance whatsoever against the Clots last week, but they will find a stouter test awaiting them this week. That's not really any trouble, as Tom Brady is the second-best quarterback in the league and can pass his way out of most problems. The difference between this year and other years, however, is that the Patriots have very little in the way of dependable receivers, Julian Edelman aside, and rely on their running game. If the Broncos are successful in keeping that in check, they will have a much easier time slowing Brady down. He doesn't have Wes Welker anymore, but guess who does.

The Broncos demolished the Chargers last week for the first half and then basically sat on their chest the rest of the game, claiming a victory that was a lot closer than it ought to have been. Denver was, objectively, some twenty points better than San Diego, but didn't win by that much because they didn't have to. That they were essentially able to toy with a team the caliber of the Chargers for a full game shows the depth of talent they have, and that they shouldn't have a serious issue with New England this week. Yes, the Patriots did beat them in New England earlier this year, but the Broncos are much healthier now and their entire receiving corps is intact. At Mile High, it will be different. The Patriots will send LeGarrette Blount at the Denver front seven time and time again, and just by his nature it will be successful on occasion, but not nearly to the degree it was against the Clots, and Brady won't be able to magic himself out of this one. He will be sent home, which I assure you is a more pleasant prospect for him than for just about any other man on the planet. Broncos win, 38-30.

These are the two best teams in the NFC. The other division winners wouldn't stand a chance against either of them. Green Bay couldn't beat the Niners in Wisconsin in the winter and wouldn't have beaten them anywhere else in any season. The Saints barely beat the Niners at home because of a ridiculous roughing-the-passer call. Apparently, Drew Brees is made of cotton candy and is not allowed to be accosted by the defense. Personal foul, San Francisco, roughing the golden goose, fifteen yards, automatic first down. Seattle demolished New Orleans last week and made them look like Tulane. In fact, Tulane might have done a better job than the Saints did in that game.

So the correct teams are facing off. Seattle has the advantage of Qwest ChainLink Field, which is the toughest place to play in all of football. The Seahawks have been utterly dominant there, except for one pesky game against Arizona where they probably didn't care about anything and may just have lost to screw over the Niners. It didn't work, and now the Niners have come calling, with two impressive road playoff victories under their belt. Luckily for the Seahawks, Colin Kaepernick has never played well in Seattle. This is what we call Small Sample Size Theater, because Kaepernick has only played two games there, certainly not enough of a body of work to say that he has some sort of issue with the building. The troubling part for San Francisco is that while other teams have come in to ChainLink in the last two years and been competitive, the Niners have not. They were blown out the last two years there, both on national television if memory serves. That's no way to tell the world you're ready to go in to a place and beat the best defensive team the league has seen since the 2000 Ravens.

Colin Kaepernick has a lot of playoff exeprience now, as do the rest of the Niners, and they did the world a favor by losing to the Ravens in the Super Bowl last year. You see, they made sure the Ravens would pay noted statue Joe Flacco a bajillion dollars, and ensured that the team would never be competitive again. Nobody likes the Ravens. However, the Niners are repaid for this favor by being sent to Seattle, where they will undergo a horror show the likes of which they have not seen since the last time they were there. Marshawn Lynch will run wild and the defense will shut the Niners down, something no other defense has been able to do sine Carolina won in San Francisco many moons ago. Seattle wins, 27-13.

After their respective games, intrepid sideline reporters will ask Brady and Kaepernick what went wrong for them. Here is a foretaste of how that will go. 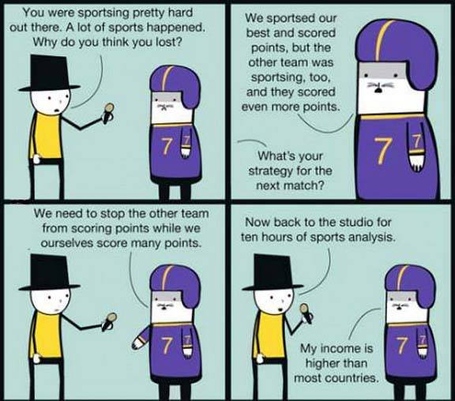 So there you go. I'll make sure to pass along my prediction for the Super Bowl in a couple weeks. My good friend Old Man Winter will have a field day with that one, I promise."

There you are, Raider fans, the second-to-last revelation of the season from the Great Beyond. Until next time!