The Great Beyond never rests with its visions of the future, even if the Raiders are out of the picture. What tidings has it brought regarding the opening round of the playoffs?

Greetings, Raider fans! It is I, RaiderDamus, the Baddest Man in the World. I was preparing for a long winter's slumber and rest from the arduous ordeals of communicating with the Great Beyond. However, many of my loyal readers have requested that I seek Mr. Beyond's guidance regarding the rest of the playoffs even though the Raiders are not involved. To that I say... 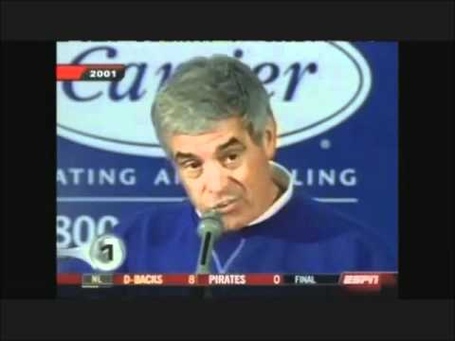 PLAYOFFS? You kidding me?

Oh, all right. So here I go, down to the scrying pool once again to say what the other side has to say about these football games involving teams we don't even like. Just so we're clear, I am copying down exactly what I was told, so none of this is my own analysis.

"Who's there? What do you want? Oh, it's you. I was in the middle of a Real Housewives of Valhalla marathon. Now I have to put on pants. How troublesome. Football games, you say? Four of them, really? Are you sure? Well alright. It looks like the Niners are playing in Green Bay this week. The Packers just barely squeaked by the Bears last week, which frankly is hilarious because the Bears combine the aesthetics of the Cloverfield monster with the talent of Paris Hilton. Their fanbase models itself on a George Wendt SNL sketch from the mid-80's. I am in no way decrying the greatness of Mr. Wendt, but if he isn't the very model of a modern major Bears fan I don't know what is.

The Eagles laid 54 points on Chicago a few weeks ago and the Packers' effort therefore leaves a bit to be desired. Meanwhile, the Niners have won six straight games including a victory over Seattle and on the road against a decent Cardinals team, which could not overcome the fact that Carson Palmer is their starting quarterback. They made their bed, now they must lie in it. San Francisco is 12-4, the Packers narrowly avoided being 8-8 by virtue of a tie against the Vikings. Ties are the worst thing in all of sport; we changed hockey to get rid of ties and that's why Americans hate soccer. If the United States had tied in the Revolutionary War, we'd all be speaking German or something like that. Ties suck, teams who tie suck, and the Packers suck. Niners win, 24-23.

This is an interesting matchup- the city that parties all the time and doesn't care about anything against the city that cares WAY too much about everything. Nice town you have there, New Orleans. Shame if something... happened to it.

Many years ago, there was a draft in the NFL. A radio show host in Philadelphia implored the Eagles faithful to travel to the NFL draft and heartily boo any player the Eagles drafted so long as it was not Ricky Williams, the man this radio host wanted the Eagles to select. It was not hard to get many Eagles fans to do just this, as "booing" is high on the Philadelphia citizen's list of things to do, even higher in priority than eating, breathing and sex. So the Eagles fans went to Radio City Music Hall in New York and booed Donovan McNabb, a man whose jock they were not worthy to sniff.

The New Orleans Saints, conversely, traded their entire draft and the town virgin for Ricky Williams, who spent several unhappy years there until he became a hippie Buddhist and ran away to join the circus. New Orleans has since improved and won a Super Bowl, but Philadelphia has not. They never will, because they do not deserve to. They booed Mcnabb, they throw batteries at people, they booed Santa Claus, they puke on little girls, and they root for the Phillies and the Flyers. These are unforgivable things, and they result in such consequences as having to face the 1980 Oakland Raiders and the 2005 New England Patriots in the Super Bowls they make it to. Let it not be said that I am cruel to Philadelphia- after all, it is not Cleveland.

That being said, the Saints cannot and will not win outside in the cold away from New Orleans. They have built a nice little den of comfort at home, and when they leave it they are like unto lost lambs, bleating for their shepherd. On Saturday that shepherd will be LeSean McCoy, who will mercilessly slaughter them. Eagles win, 34-24.

Andrew Luck is really great, but the Colts could have dug up the corpse of Johnny Unitas and stuck him into a uniform and he could have led the team to a division title. The 2013 AFC South was one of the worst divisions in recent memory, with the Texans and Jaguars both being horrendously awful and the Titans winning games despite also being terrible. Indy won the divison by default, but now they face an actual test.

The Chefs have had a dramatic turnaround this year, facilitated by hiring the Kool-Aid Man Andy Reid as their coach. His system worked wonders in Kansas City, and Jamaal Charles ran wild. The defense also improved and the Chefs would have won the division if not for the Broncos' Peyton Manning having the greatest season in the history of football.

The difference between the two teams is that the Colts' defense isn't that great while the Chefs' defense is excellent. That really matters in the playoffs, and even though the Chefs always choke in the postseason I think they will wait another week to do that this year. They will crash their way through the walls of he RCA Dome and into the Divisional Round. OH YEAH! Chiefs win, 17-16.

The Chargers are the third AFC West team to make the playoffs; in fact every team in the division besides the Raiders made it. The AFC this year was just dreadful. Nobody wanted the last playoff spot. Miami didn't want it, Baltimore didn't want it. Pittsburgh did want it, but the refs decided they didn't want Pittsburgh to have it and so they made Kansas City lose to the Chargers. Welcome to the party, San Diego. Now please go home.

The Bengals, on the other hand, wrapped up their division weeks ago and have been a quality team all year despite the loss of stud DT Geno Atkins early on. They were the first team to defeat New England this year and did not lose a single game at home. They have two excellent pass rushers in Carlos Dunlap and Michael Johnson and a good linebacking corps led by Rey Maualuga. On offense, A.J. Green is one of the finest receivers in football and while Andy Dalton is a dweeb he does have good touch on his deep ball. The Bengals' running game is underrated because they have a number of backs who can carry the ball well including Giovanni Bernard and the Law Firm of Benjarvus, Green and Ellis. Cincinnati will blow up the Chargers in this game, and Philip Rivers being the gormless cowboy that he is will ride that atom bomb all the way to the ground, waving his hat and woo-hooing until he and his team are no more. Bengals win, 31-20.

There are more games next week? How long does this thing go on? February? For crying out loud. I'll have to DVR Keeping Up With The Olympians."

So there you have it, folks, the message of the Great Beyond. Until next week, RaiderDamus is out.