Accuracy of Raiders word cloud is either hilarious or sad

Share All sharing options for: Accuracy of Raiders word cloud is either hilarious or sad

The online forum and content sharing site that is Reddit put together an interesting graphic for each NFL team. They collected all the most used words and put them together in a word cloud. Most of you are familiar with the concept of word clouds. But just in case you aren't, here's a quick definition for you:

A visual representation for text data, typically used to depict keyword metadata on websites, or to visualize free form text. Tags are usually single words, and the importance of each tag is shown with font size or color.

So basically the more times a word is mentioned in a certain context, the larger it will appear in the cloud. And the one they did for the Raiders is either hilarious or very sad. Or perhaps a bit of both.

They created word clouds for the top 100, top 200, and top 300 words for each team as well as an overall NFL discussion thread cloud. (You can check out the entire page here.)

For our purposes here, we'll stick with the top 100 words. 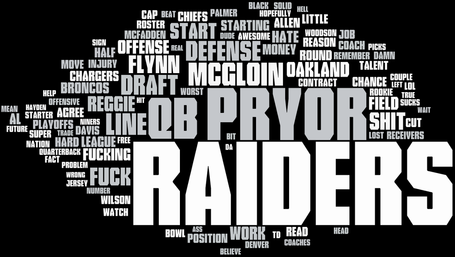 Of course the most used word is "Raiders". That's a given.

Next up is that of "Pryor" as in Terrelle Pryor. His name is considerably larger than any other word in the cloud and if any of you have been around this site this year, there's no question as to why that would be. The debates about Pryor were at an almost constant. And this cloud doesn't even include the times someone referred to him as TP. Include those times and it could be larger than the Raiders.

"Larger than the Raiders"... Yeah, that sounds about right. Often times it seemed like the opinions on Pryor were bigger than the team. Even resulting in some openly rooting for other quarterbacks to fail and therefore the Raiders to fail in the process.

The Raiders aren't alone in this QB obsession though. Some of the other clouds had the names of the quarterback rivaling that of the team as well. Including "Dalton" for the Bengals, "Romo" for the Cowboys, "Freeman" for the Buccaneers, "Schaub" for the Texans, "Ponder" for the Vikings, and "Brady" for the Patriots. Pretty clear it's the more controversial quarterbacks who get fans talking. And in most cases, the one who gets their blood pressure up.

After that for the Raiders it was "McGloin", "Draft", "Defense", "Line", which tells you just what was missing from the field for the Raiders. They had very few starts by draft picks, a pathetic defense, and a beaten up offensive line that was almost constantly in flux.

After that there were a lot of cuss words. Yeah, Raiders fans did a LOT of cussing this season and for good reason. But not as much cussing as the Dolphins and the Bears fans did. 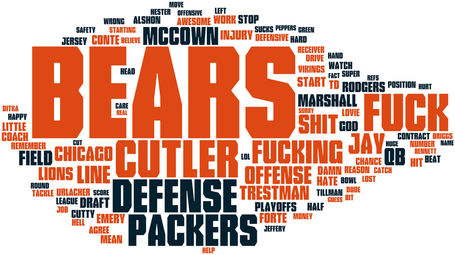 Then there's this one in which the way the words are organized under the team name I found to be pretty funny. It seems very much like what a Browns fan might say during and after a game "DEFENSE! S#!T, F@%K, Little F@%KING..."

Then there was the Jaguars fans who favored the word "Draft" mainly because no sooner did the season start but they were already looking forward to next year's draft.