Fans have spoken: Defensive end should be Raiders top priority

Share All sharing options for: Fans have spoken: Defensive end should be Raiders top priority

Nearly half the voters (46%) put defensive end as the top priority. In second place with 31% of the vote was quarterback. Then in a distant third was offensive line with 12% of the vote.

Here is the complete poll results: 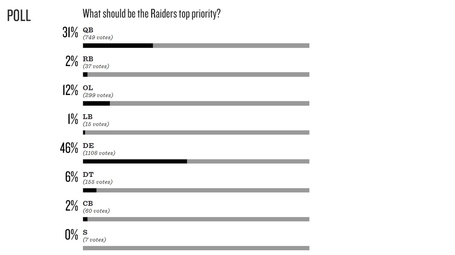 Hard to argue these results. The Raiders are in a desperate situation at defensive end and as the Super Bowl Champion Seahawks showed, pass rush is vitally important. The Raiders need to see to it they re-sign Lamarr Houston and then add a defensive end to bookend him on the other side.

I would be those who voted for defensive end, if given a second priority, it would have been quarterback. It's not secret the Raiders quarterback position was not in great shape last year. The Matt Flynn experiment was over by week 5, the Terrelle Pryor project was over by week nine, and expecting undrafted rookie Matt McGloin to miraculously swoop in and save the day was asking for disaster.

Offensive line may have been a distant third but it really is in need of attention. Left guard in particular was the undoing of the offensive line and much of the offense last season. Lucas Nix was literally the worst left guard in all of football. Khalif Barnes stepped in late in the season and fared better but the team must consider bringing in a long term solution.

There are a lot of needs on this team and fans would probably rather they were allowed to rank them instead of having to choose just one.