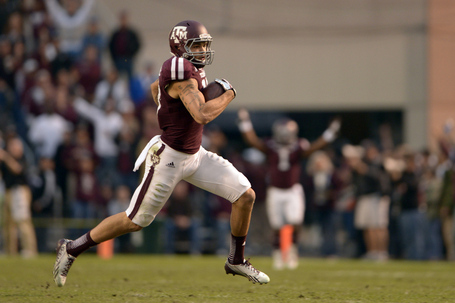 This is assuming that Jadeveon Clowney, Khalil Mack and Sammy Watkins are gone.

What do Calvin Johnson, Brandon Marshall, A.J. Green and Vincent Jackson all have in common? They are all 6'4" or taller. Mike Evans is a huge wide receiver from Texas A&M listed at 6'5", 231 lbs. Just his size alone makes him a match-up nightmare for NFL cornerbacks (average height of 5'10"). Add on to that size a 37-inch vertical and Evans is almost unstoppable when given a jump ball. He has great control of his body and catches the ball at its highest point. Evans has reliable hands and is a solid route-runner. He plays physical making him tough to press. For his size, he has impressive speed.

The last time the Raiders had a wide receiver eclipse 1,000 yards was when Randy Moss achieved the feat in 2005. That has to change if the Raiders want to become successful. Enter Mike Evans who can utilize his huge frame to box out defenders. He is the ultimate red zone weapon because of his size and leaping ability. Evans can become an Andre Johnson 2.0 for Matt Schaub. 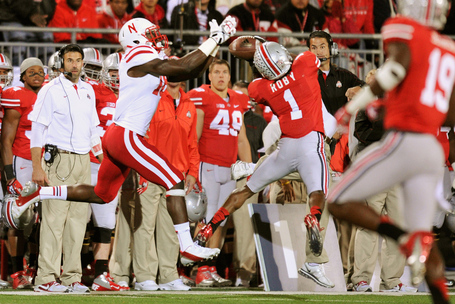 Bradley Roby has a tremendous skill set. At the NFL Scouting Combine, he ran a blazing 4.39 40-yard dash. He also posted a 38 1/2 inch vertical. Roby has good size with thin ankles and large hands. He has loose hip and turns very quickly. In the air, Roby has great control of his body and catches the ball at its highest point. He has great acceleration and when he occasionally loses a step, he shows great recovery speed. Roby is very physical and is not afraid to provide run support. He is a dangerous blitzer and kick blocker.

I had Bradley Roby as the number five cornerback in my defensive position rankings, but he very easily could be higher. Only Justin Gilbert has more potential than Roby. In 2012, he looked like the best cornerback in college football. But in 2013, his production slipped, and so did his draft stock. If he was more consistent last year and did not have character concerns, Roby would be a top ten pick and the number one cornerback in the draft.

However, he has now likely slipped out of the first round. This is what might potentially make Bradley Roby the steal of the draft. Like I mentioned, he has the second highest ceiling of any cornerback. But unlike Justin Gilbert, Roby can be selected in the early second round.

Adding Roby to the defensive backfield would give the Raiders a strong group with young talent and veterans. Tarell Brown and Carlos Rogers add experience but are both only signed to one-year contracts. D.J. Hayden should improve with a full offseason under his belt. That would leave Hayden and Roby as the long-term cornerbacks in Oakland. 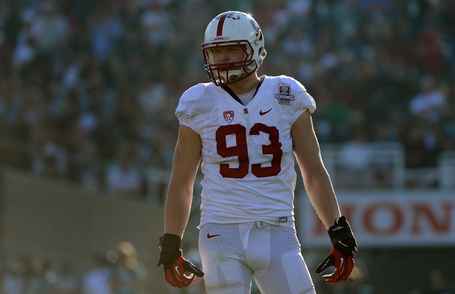 Trent Murphy was the heart and soul of a dominant Stanford defense. He had outstanding production against tough competition in the Pac-12. Although Murphy played 3-4 outside linebacker at Stanford, he has the size and athleticism to convert to a 4-3 defensive end in the NFL. He has long limbs and plenty of room to add muscle. Murphy is very instinctive and smart. His hands (11 1/8 inches) were the biggest of any player at the NFL Scouting Combine. Murphy is very physical and has an outstanding motor. He is a hardworking player that will keep the rest of the team accountable.

In the offseason, the Raiders lost both their starting defensive ends (Lamarr Houston and Justin Hunter). They filled the hole by signing Justin Tuck and Lamarr Woodley. Both were signed to only two-year contracts. With the addition of Trent Murphy, he can learn behind both Tuck and Woodley while giving Woodley competition at the same time. In two years, Murphy could take over as the starting defensive end for the Raiders. He has the potential to be an impact player and leader on the defensive line. 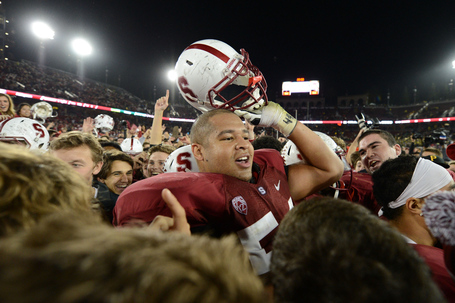 Just two months ago, it was widely viewed that David Yankey would be picked in the first or second round of the NFL Draft. But there has been buzz around the league that he could fall to the fourth round. Why is Yankey falling? I have not found an answer to that question and he is still the number two offensive guard in my offensive position rankings. While he would be a reach in the first round, I still think he is a second round talent.

He has excellent size for a guard but still has the explosion necessary to be an effective puller. Yankey uses his long arms to create extension between him and defensive lineman. He does a good job of getting his hands on defenders when blocking. Yankey is a durable three-year starter that is smart and reliable. He is a ferocious run blocker.

Yankey would start on an offensive line consisting of Donald Penn, Stefen Wisniewski, Austin Howard and Menelik Watson. What Yankey lacks in athleticism, he makes up with experience, intelligence and leadership. He does not have the ceiling to become a star, but he is a sure bet to be a reliable starter for the next decade. If Yankey falls to the fourth round, the Raiders would pick up a second round talent on day three. 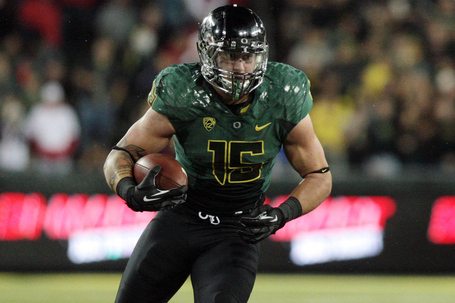 Last year, Colt Lyerla was considered one of the top Tight Ends in College Football. That all changed when Lyerla was arrested for cocaine possession and kicked off Oregon's football team. Lyerla has many off-field issues which will lower his draft stock.

But, Lyerla is one of the most athletic players in the entire 2014 NFL Draft. At the NFL Scouting Combine, he ran a 4.61 40-YD Dash (third best) and had a 36" Vertical Jump (highest by four inches). Lyerla also tied for first in the Broad Jump with an incredible 10'8". He is 6-4, 246 lbs and runs like a deer. Lyerla has soft hands and is also extremely good at receiving. In space, Lyerla is tough to tackle because he is so fast, yet so big. On the line, Lyerla is a strong blocker who uses his hands well allowing him to be a dual-Tight End.

Lyerla is a high-risk, high-reward pick. But in the seventh round where most picks do not start, he is worth the selection. Lyerla has a chance to become a top-10 Tight End in the NFL. While Mychal Rivera was a nice surprise, the Raiders need depth at Tight End and Lyerla could add not only depth, but potentially another starter. Reggie McKenzie said, "You shoot for playmakers", and that is exactly what Colt Lyerla is.

Seventh round (235 overall from Arizona Cardinals): 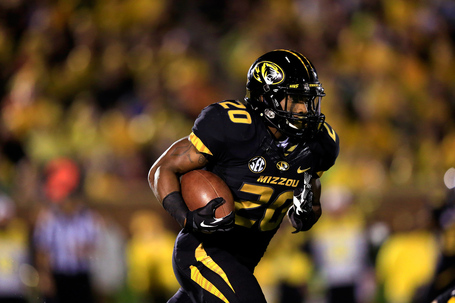 Henry Josey is a very shifty running back from Missouri. In 2011, he tore his ACL, MCL and both the lateral and medial menisci costing him the 2012 season. He returned in 2014 to run for 1,166 yards and 16 touchdowns. Josey is small but very agile and quick. He ran a 4.43 40-yard dash at the 2014 NFL Scouting Combine finishing third among all running backs. He averaged 7.4 yards per carry his last two seasons. Josey is highly respected by his teammates and coaches.

The Raiders already have three big running backs in Darren McFadden, Maurice Jones-Drew and Latavius Murray. Josey can provide a different dynamic that Danny Woodhead and Darren Sproles have. He might not be a starter, but he can be used for different offensive schemes. In Josey, the Raiders will get a hard working player that can pack a punch on the field.

John Brown ran the second fastest 40-yard dash (4.34) of any receiver at the NFL Scouting Combine. He is one of the draft's biggest sleepers. Brown is a fifth or sixth round talent, but the depth at wide receiver this year should push him back into the late seventh round. He is very athletic and accelerates quickly. Brown has consistent hands and runs crisp routes. He lacks ideal size and has short arms with small hands. He will need to adjust too much better competition.

While Brown could one day become a slot receiver in the NFL, he will make an immediate impact on Special Teams as a returner. In 2013, Brown was named the 2013 MIAA Special Teams Player of the Year. Brown has a chance to become what Jacoby Ford was meant to be. While the addition of Mike Evans solidifies the receiving corps, Brown will make his living returning kickoffs and punts.