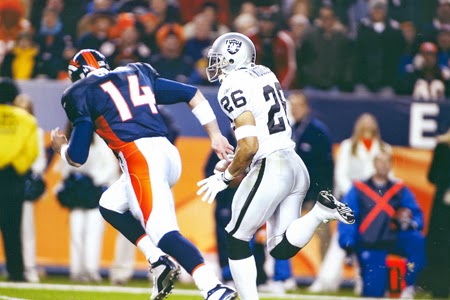 Former San Francisco 49ers head coach Bill Walsh started bringing in intern coaches to training camp in 1987, a concept that was eventually picked up by every team in the NFL. Today, it's known as the Bill Walsh Minority Coaching Fellowship Program.

Woodson spent time with the Cincinnati Bengals as an intern before joining the Raiders as a defensive backs coach in 2011. After Oakland did not bring him back for the 2012 season, Woodson spent 2013 coaching in Pittsburgh.

He's now headed to Denver to coach this summer.

Woodson was drafted by the Steelers tenth overall in the 1987 NFL Draft. After ten seasons in Pittsburgh, Woodson spent time with the 49ers and Baltimore Ravens before finishing his career in Oakland.

In his final two seasons (2002-03), Woodson recorded 133 tackles and ten interceptions. Woodson went 5-3 against the Broncos in his career, recording four interceptions, including the longest of his career—98 yards for a score—against Brian Griese in 2002.

A Hall of Fame cornerback and safety, Woodson recorded 71 interceptions in his career.

Will Woodson ever return to coach again in Oakland?