Do you agree with PFF's ratings of Raiders depth chart?

Share All sharing options for: Do you agree with PFF's ratings of Raiders depth chart?

Pro Football Focus took aim at the Raiders' entire depth chart today to give their ratings of each player projected at each position. They color coded it to make it nice and easy to comprehend at a glance. Here is the graphic showing what they believe to be the talent level of each player on their projected depth chart: 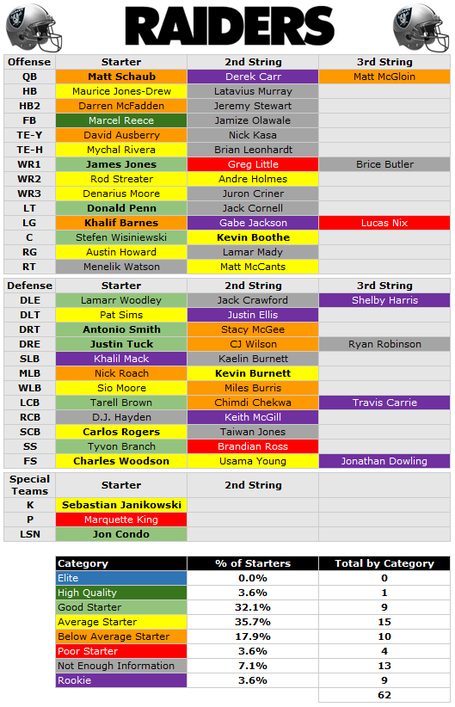 As you can see, they don't have any players on the Raiders who they consider to be "elite" with just Marcel Reece rated as "High Quality". Though the starting defenders have quite a few "Good Starter". The greater percentage of the roster is made up of "Average Starter(s)".

PFF had this to say about the Raiders efforts to shore up the pass rush.

The Raiders invested a lot in their front seven this year and, while we don't have any of the new additions higher than light green, adding the likes of Lamarr Woodley, Justin Tuck, Antonio Smith and rookie Khalil Mack should make things exciting for Raiders fans in 2014.

Do you agree with the ratings of each of these players?