One of the more famous and well-known Raiders fans has passed today. Actor James Garner, most recognized for the title roles in television series "Maverick" and "The Rockford Files" which spanned over five decades from the '50s to the '90s. He died today at the age of 86 of natural causes.

He was also regularly seen on the Raiders' sideline during games in those days. He was even featured in the NFL Films documentary series America's Game: The 1976 Oakland Raiders.

Here he is on the sideline with Raiders tight end, Todd Christensen: 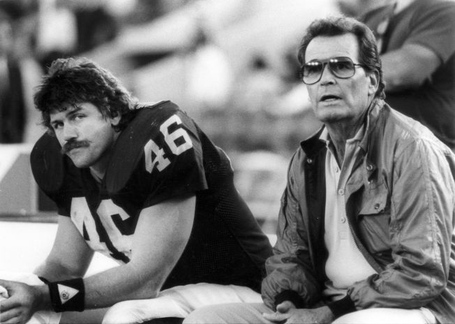 The Raiders tweeted out this shot of Garner with John Matuszak

There's even a T-shirt commemorating him as a staple with the Raiders:

You know you want this James Garner/Raiders T-shirt. (You actually can buy it on eBay right now.) pic.twitter.com/R3HWliV93I

Rest in Peace, Mr Garner. You were a great actor. And for those of you who may be too young to know who he is, you should familiarize yourself. Few had longer and more distinguished acting careers.