In what should honestly be a surprise to nobody, the NFL has officially cleared Peyton Manning of any wrongdoing in the doping allegation that was originally reported by Al Jazeera. The NFL concluded that there was no credible evidence available to prove that Peyton Manning did indeed use HGH.

While the NFL has closed the book on Peyton Manning, a retired mega-star who had very little the NFL could do now to him, they have not ended investigations into other players named in the report like Clay Matthews, Julius Peppers and James Harrison. Though the accuser has recanted all of his statements, the NFL is still looking closer into the allegations against current NFL players that can still be punished if credible evidence is discovered.

Peyton Manning has avidly denied any and all allegations against him since they were first aired by Al Jazeera back in December of last year. He has admitted to having treatments performed at The Guyer Institute back in 2011 but says that he used no banned substances and mainly was there for their hyperbolic chamber.

The original report claimed that the Human Growth Hormone was sent to his wife and the Manning's have always refused to comment on any of her medical treatments as they are confidential and she is not a professional athlete. The NFL has now concluded their investigation into Manning entirely though, allowing him to skate unscathed by the scandal into his retirement years.

N.F.L. Clears Peyton Manning of Doping Accusations - The New York Times
The league said that after a seven-month investigation it had found "no credible evidence" that Manning was provided with or had used prohibited substances.

Other stories from around the AFC West

POLL: Is Mike McCoy on the "hot seat"? - Bolts From The Blue
The San Diego Chargers Head Coach likely won't have much time to prove himself valuable of a contract extension this season, but he has a lot going in his favor.

In Melvin Gordon, Adrian Peterson has found a challenger and a protege - Minnesota Vikings Blog- ESPN
Working out together in the offseason is showing benefits for both the second-year Chargers running back and the Vikings' four-time All-Pro.

Can any of the Kansas City Chiefs rookies unseat Phillip Gaines? - Arrowhead Pride
Do the Chiefs have a young rookie who can win the No. 2 CB job or will it be Gaines?

Helping the Chiefs chances of winning a Super Bowl: The passing game - Arrowhead Pride
Hail the all mighty, glorified quarterback position. Without amazing quarterbacks no team would ever win the Super Bowl -- er, wait... didn't Trent Dilfer and Brad Johnson both win a Super Bowl?

Other stories from around the NFL

Darnell Dockett reportedly will retire from the NFL on Monday | FOX Sports
The longtime Arizona Cardinals defensive end has missed the last two seasons. (Raiders fans won't miss him after his BS antics the last time they saw him)

Bonus - Awesome cartoon from Ted Crowe of The Plain Dealer 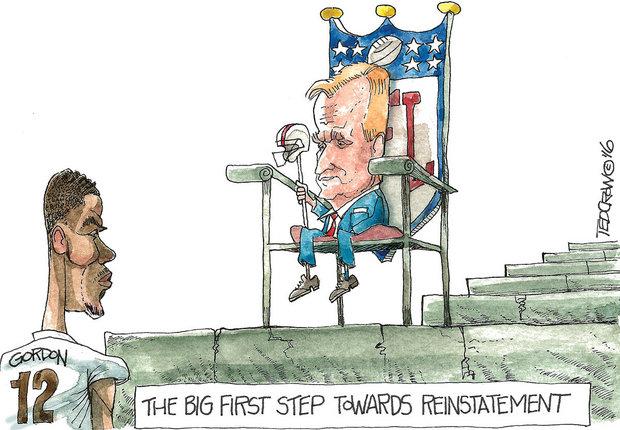