How it going Raidernation!! What a win over the Cleveland Shitstains Browns!!! Of course I kid, the Browns have a good roster and put up a good fight, however as we all know the game came down to several important moments, the first of which was the controversial spot and respot of the ball that went from giving Cleveland the W, to letting Carr work his 4th quarter chops (seriously, he pulls this crap out of his ass sometimes)

Anyways y'all didn't click on this poor excuse of a fanpost to see me pussyfoot around the subject. From the Broadcast angle here is the extremely important picture we have been waiting for!!! 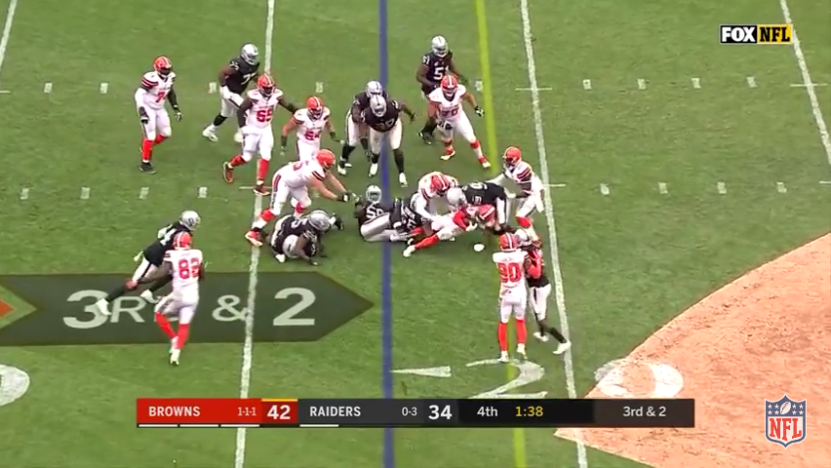 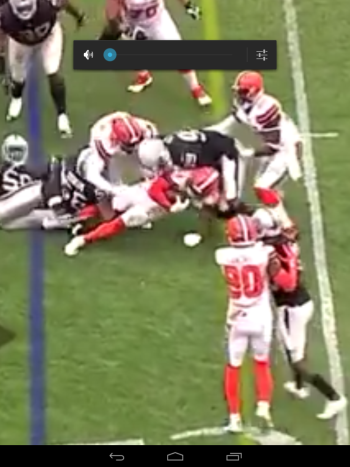 Looks to me that Hyde's elbow is just barley before the tip of the yellow line, and the ball is inches away from where he would need to convert, the 19 yard line.

Here is the ref's quote on the matter

Seems to me that's exactly what happened.

Now its very important to keep some things in mind

1) The yellow line is unofficial of course.

2) This was taken right before Hyde stretched out and laid across the line, so I understand why the officials on the field chose a more generous spot at the time.

3) Spot calls rarely get overturned, and in real time it looked like a first. Hell I thought we got a giant break and the Browns had the misfortune of the refs this week. Id wager that 95% of people watching in real time would spot the ball as a first

4) Of course there is a slight angle on these from the broadcast booth. I dont know of an angle looking straight down the 1st down marker. So as far as I know these are the best we have. (Or maybe I'm just an ignorant fool and there is such a thing. You would think there would be anyways, just line up a camera with the markers. But I digress.)

5) That sound bar in the zoomed in version was a critical, and underappreciated part of the play. I dont know why anyone hasn't mentioned it yet, you think keeping chief trolls silent in such an important play is easy??? Sheesh

Yet as far as I'm concerned these pictures show me, beyond a reasonable doubt, that we did see the correct call on the field. Now the officiating was bad for most of the game, and cost us a Beastmode TD and the browns a fumble recovery for 6 + all the other crap that went on. Hopefully though these shots can stop the narrative that the refs "gave one to us on that spot."

Sorry Cleveland, you cant cry rigged today. Maybe next time dont go three and out in your only offensive possession in overtime? Or dont choke leads.

What do you think Nation? Did the Browns get the first?