Share All sharing options for: Oakland Raiders 7-round mock draft 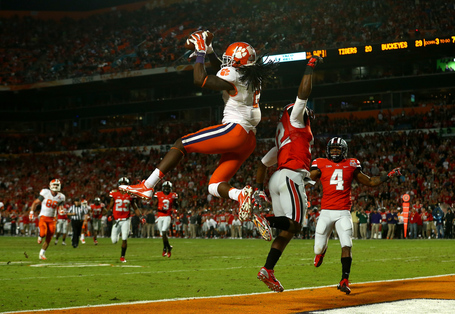 Every couple of years, a wide receiver emerges that is an elite caliber player. In the last eight years, there have been four of those talents: Calvin Johnson, A.J. Green, Julio Jones and Sammy Watkins. It is no coincidence that Johnson, Green and Jones are three of the top receivers in the NFL. Watkins has the talent to follow in their footsteps.

The most important trait a wide receiver must have is the ability to catch the football. A wide receiver could have all the talent in the world but if they can't catch, the talent does not matter (Darrius Heyward-Bey). Watkins is a talented receiver, but he can catch. He has large hands (9 5/8") that he uses to pluck balls out of the air and does nice job of looking the ball into his hands before turning up-field.

After the catch, Sammy Watkins is unstoppable. He is fast (4.43 40-YD Dash) but also quick. Watkins has excellent vision and will slow down to let blockers get in position before speeding up. He has good depth in his routes with quick footwork in/out of his breaks.

The biggest concern scouts have with Sammy Watkins is his size. He only has average height along with a lean frame that lacks muscle definition.

Watkins has minor character concerns as he was arrested in May 2012 facing drug-related charges.

While Rod Streater and Denarius Moore are both young and talented, they have also been inconsistent. James Jones on the other hand is extremely reliable but at 29 years old, his best days are behind him. Reggie McKenzie wants a playmaker, he will find one in Watkins. Watkins is the number two overall player on Daniel Jeremiah's big board. 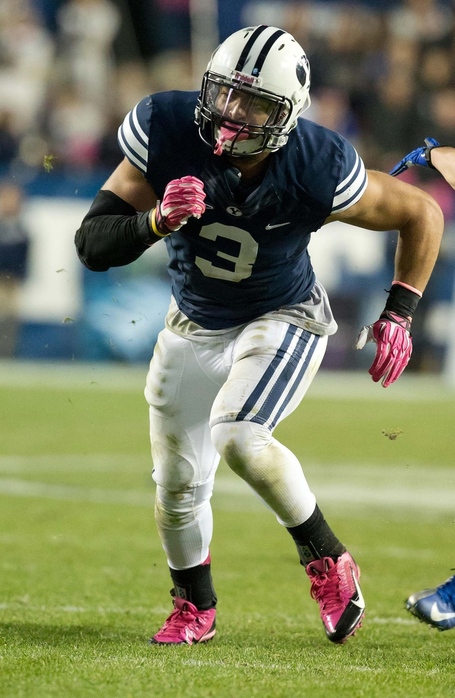 Bill Belichick built the Patriot's dynasty through the draft. He focused on smart players that were eager to learn. That mentality worked as the Patriots won three Super Bowls in four years (2001, 2003, 2004). Kyle Van Noy meets Belichick's description because what he lacks in athleticism, he makes up with smarts.

Van Noy is a very instinctive player who displays quick reactions. He shows good effort in his pursuit and locates the ball quickly. He has excellent play recognition. Van Noy's fluidity makes him very effective in coverage (he had 7 interceptions in three years).

Van Noy's biggest weakness is that he is not an elite athlete. He overuses the bull rush technique coming off the edge. Von Noy gets to the ball using instincts, not physicality. He runs around blockers instead of taking them head on. Von Noy is not a great tackler and lacks the size to make explosive hits. He was not as productive in 2013, but a large part of that is the loss of Ziggy Ansah. Ansah was often double-teamed freeing up Van Noy.

Justin Tuck, Lamarr Woodley and Kevin Burnett are temporary answers for the Raider's need at pass rusher. While Kyle Van Noy is not the most athletic, he is smart. Tuck, Woodley and Burnett could mold Van Noy into a very productive pass rusher. Pair him with Nick Roach, Sio Moore and Miles Burris, and the Raiders are set at linebacker for years to come. 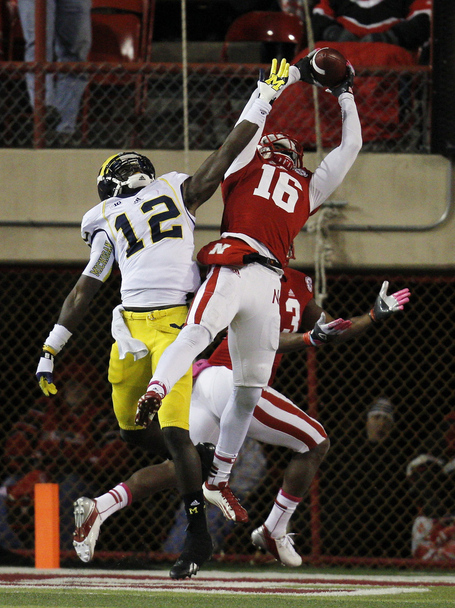 As teams continue to copy the Seattle Seahawk's defensive mentality, tall cornerbacks are becoming more popular in the NFL. Guys like Richard Sherman and Aqib Talib are able to physically matchup with almost any wide receiver. Stanley Jean-Baptiste fits that mold perfectly.

Baptiste is a large cornerback listed at 6'3" that can also physically dominate receivers. His long arms help him win 50/50 balls. He has fluid hips that make him effective in zone coverage. In man coverage, Baptiste does a great job in press where he utilizes his large frame to get a strong jam. Baptiste shows good instincts and has quick reactions. He boasted the second highest vertical (41.5") of any player at the NFL Combine.

Baptiste needs to improve his run defense. He ducks his head when tackling causing him to miss at times. Because of his size, he does not have elite speed or great acceleration.

While the Raiders signed Tarell Brown, they failed to resign Tracy Porter who was viewed as the team's best cornerback last year. D.J. Hayden should improve after he gains a full off-season to fine tune his skills. Hayden has the potential to be a great cornerback in the NFL. But who will start on the opposite side of Hayden in 2015? Brown only signed a one year contract and while he provides leadership, he is past his prime at age 29. Baptiste could learn from Brown in year one and then take over the starting position in 2015. With Hayden and Baptiste starting at cornerback, the Raiders would have a very formidable secondary. 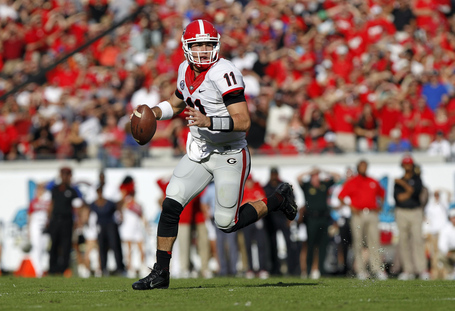 40-YD Dash: 4.95 Unofficial (Murray did not run at the NFL Combine because of an ACL tear)

Last year before the 2013 NFL Draft, former Head Coach Tony Dungy had some nice things to say about Aaron Murray.

"@CoachCox8100: @TonyDungy who should chiefs take with first or 2nd pick in the draft?" I would take Georgia QB Aaron Murray if he comes out

@bob_mcclellan @ChaseGoodbread Yes I am a big Aaron Murray fan. I think he's going to be like Russell Wilson.

Dungy spent seven years working with Hall of Fame caliber quarterback Peyton Manning. If someone knows a lot about quarterbacks, it is Tony Dungy.

Aaron Murray was a four year starter in a pro-style offense at the University of Georgia. Because of his experience, Murray does all of the little things right. He has good, not great arm strength. He is very accurate and has a quick release. He throws deep balls with velocity and has a very tight spiral. Against the SEC, Murray completed 62.3% of his passes over his career for 13,166 yards and nearly three times as many touchdowns (121) as interceptions (41).

The only knock on Murray is his size. He is only 6'0" and 207 lbs which is small for a quarterback. With his height, Murray might have trouble seeing over offensive lineman in the NFL that are often 6'5" or taller. His small frame will leave him more prone to injury. Of course, there are exceptions to the rule. Tom Brady only weighed 211 pounds at the 2000 NFL Combine. Teddy Bridgewater is regarded as a top-10 draft pick even though he is only listed at 214 pounds. Drew Brees has thrown for 5,000 yards four times, but is only 6-0. Russell Wilson led the Seattle Seahawks to the Super Bowl last year despite his 5-11 frame. While great size is beneficial, it is not a necessity.

Aaron Murray is similar to Russell Wilson in that both would have likely been first round picks had they been three inches taller. Even with Murray's height, he was projected to be a second or third round selection. But after he tore his ACL against Kentucky, his draft stock dropped significantly. If he can fully recover from his injury, a fourth round pick would be a bargain for a player of his caliber.

After the Matt Schaub trade, it is less likely that the Raiders will select a quarterback in the first two days. Matt McGloin has flashed potential but has not proven reliable. If the Raiders draft Murray, he could sit behind Schaub for one or two years and fully recover from his knee injury. Murray could learn from the veteran and compete with Matt McGloin in a couple of years for the starting job.

No pick in round 5

No pick in round 6 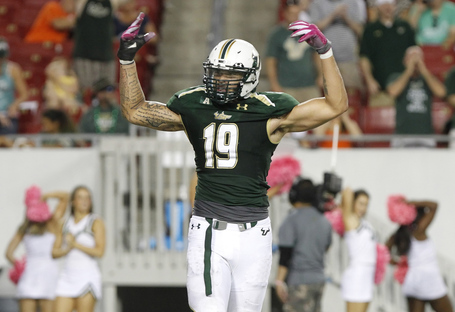 Aaron Lynch has the potential to be a top 35 talent in The 2014 NFL Draft. He is a physical machine listed at 6'5", 252 lbs. Top-ranked Defensive End Jadeveon Clowney is 6-6, 249 lbs. While Clowney is definitely the more talented and polished of the two, Lynch and Clowney have an almost identical frame. Lynch has a perfect body for an NFL defensive end.

At Notre Dame, Lynch was dominant and looked polish in terms of technique. This year at USF, he took a step back both in stats and technique. Lynch has a very quick first step and is a very effective pass rusher.

But Lynch comes with a catch. His motor is a concern as he occasionally take plays off or lets up on his pursuit.  If not for his effort, Lynch would have been a first or second round selection. But his stock has plummeted after showing laziness on the field. Lynch is a high-risk, high-reward pick but for a 7th round pick, he is definitely worth the gamble. With Justin Tuck and Lamarr Woodley as mentors, Lynch has the potential to be a star with the Raiders and would provide them a much needed pass rusher. 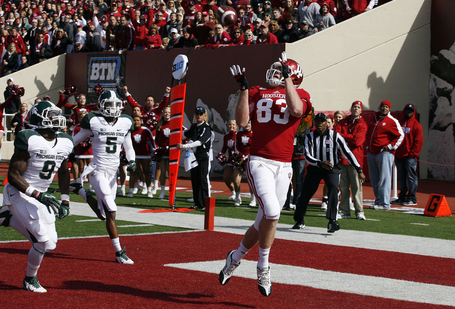 What impressed me most about Ted Bolser was his blocking and effort. He uses his large frame to overpower defenders. Even if Bolser missed a block, he still tried to chase him down. If Bolser pancaked someone, he was looking for the second victim. The Raiders already have a play-making tight end in Mychal Rivera; now they need a tough tight end that can block.

For a guy his size, Bolser is very athletic. At his pro day Wednesday, Bolser ran a 4.75 40-YD Dash which would have been the sixth best among tight ends at the NFL Combine. He has soft hands and uses his long arms to snatch balls. In the red zone, Bolser is a dominant presence because of his size.

Nick Kasa did not pan out at tight end leaving the Raiders with Mychal Rivera and David Ausberry. In the seventh round, most players only see the field on Special Teams. But Bolser has the tools to become a starter across from Rivera.